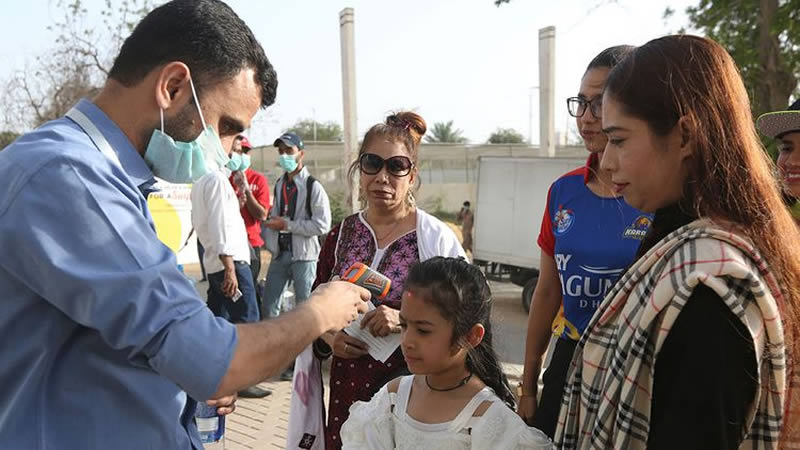 The first case of COVID-19 was reported in the city of Wuhan, China in November 2019. Since its appearance, the virus has spread itself across the globe, infecting 2.5 million people in the world as of 22nd April 2020. However, the disease that has brought catastrophe in more prosperous countries has failed to prove as severe in a third-world country like Pakistan.

Whereas the number of confirmed cases has risen far beyond 100,000 in countries such as the USA and Italy, Pakistan’s tally of COVID-19 cases stands at a relatively meager rate of 10,072 of which 2,156 have recovered and 212 have lost their lives.

This raises an important question in observant minds: How has a country with far less resources successfully weathered a storm that has brought wealthier states to their knees?

The first possible explanation may be that the countries’ populace is more resistant to being infected by the virus. Usually this resistance can only be imparted to humans based on previous exposure to the organism; this is often the basis of vaccines that are administered to people that make them immune to the infection. With that possibility eliminated, one may look to other diseases and vaccines that might grant resistance to people living in these areas.

Many diseases are endemic to this part of the World. For instance, the Bacillus-Calmette Guerin (BCG) Vaccine is mandatory for administration to newborns in countries such as Pakistan, India and Nigeria granting immunity against Tuberculosis. This vaccine, however, is not mandatory in First World countries such as the USA, Italy and Spain. It seems that country that administered the BCG Vaccine on a mandatory basis have seen far less cases of COVID-19 than those who did not. However, no direct evidence has been presented showing that the BCG Vaccine protects against COVID19.

Furthermore, 19 countries including Pakistan bears 98% of the global Malaria burden, the drug Hydroxychloroquine is used as a treatment for this disease. It was observed that countries where Malaria is rampant and Hydroxychloroquine is routinely administered encountered far less cases of COVID-19. India, Pakistan and Nigeria are among these countries. Unfortunately, just like the BCG Vaccine, the effectiveness of Hydroxychloroquine is treating COVID-19 cases has not yet been proven but it has been approved for use in emergency cases by the US FDA.

The diseases commonly encountered in a region are not the only distinctive feature of the environment of that region, a widely held perception is that COVID-19 is less dangerous in hotter parts of the world. It must be noted, however, that warm countries such as Australia have also been impacted by the COVID-19 pandemic. Several other factors may be believed to be at play here. Perhaps a less virulent strain of COVID-19 is encountered by people in these regions? COVID-19 exists as two strains; a less common S-type strain (seen in 30% of COVID-19 cases) which was the original strain, and the more frequently encountered L-type strain (inflicting 70% of COVID-19 cases).

The World Health Organization (WHO) believes it is natural for viruses to mutate from one form to another and no strain is particularly more dangerous than the other. Age may play an important role in how rapidly the virus spreads as countries such as Italy and France, which have a higher percentage of elderly people in their population, have fared worse against COVID-19 than countries such as Pakistan with a younger population. It must be noted, however, that the mortality rate is lower as well while less people are being tested for COVID-19 in developing countries.

Clearly more research has to be conducted into what has allowed countries such as Pakistan to handle the COVID-19 pandemic better than the others across the globe. It could be any one of the factors discussed here or a combination of the variables that allowed it to withstand the worst of the COVID-19 situation.

Resting the food panic amid COVID-19