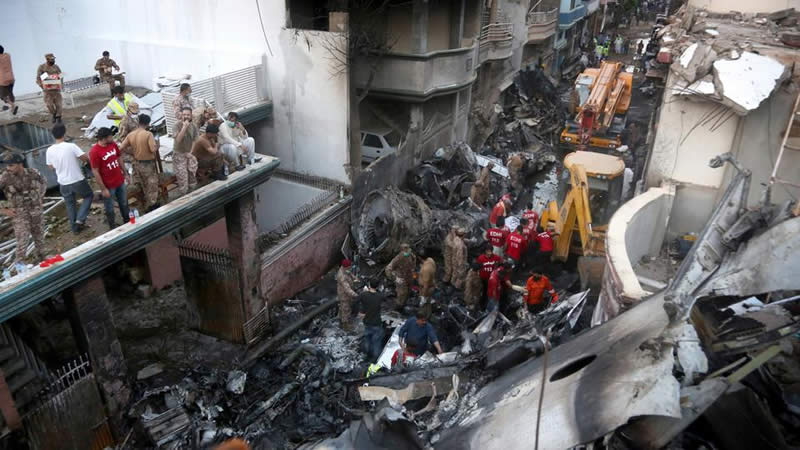 Airbus, the manufacturer of A320 aircraft, has said that the AIT (accident information transmission) on Pakistan International Airlines flight PK-8303, which crashed in Karachi on May 22, has been approved for release by the Pakistan Aircraft Accident Investigation Board (AAIB) and the French Bureau of Enquiry and Analysis (BEA) for Civil Aviation Safety.

Airbus said in a tweet: “The Flight Data Recorder (FDR) and Cockpit Voice Recorder (CVR) were read out and analysed at BEA facilities in Paris France under the leadership of the Pakistan AAIB with participation from EASA, Safran Aircraft Engines (on behalf of CMF) and Airbus. Both recorders FDR and CVR provided valuable information for the investigation.”

It further said that based on the preliminary analysis of the available data (accident site information, ATC record, FDR and CVR), Airbus has no specific safety recommendation to raise at this stage of investigation.

Chief Product Safety Officer Yannick Malinge said in his letter to all airlines operating A320 aircraft that Airbus would continue to provide official investigation authorities updates as appropriate.
Article continues after ad

Shortly after the PIA aircraft crashed in Karachi, the federal government notified a team headed by Air Commodore Mohammad Usman Ghani to investigate the incident.

Airbus had sent an 11-member team to Pakistan for providing technical assistance to Pakistani investigators. The French team and Air Commodore Ghani, along with FDR and CVR, had left for France to analyse the equipment which, they said, would provide valuable information to the investigators.

Sources said Air Commodore Ghani was scheduled to return to Islamabad on Sunday, along with details of the FDR and CVR.

The AAIB will present its preliminary report to the prime minister and the federal minister for aviation before making it public.

Aviation Minister Ghulam Sarwar Khan had already said that the government would present the preliminary report on the PIA aircraft crash in parliament on June 22.