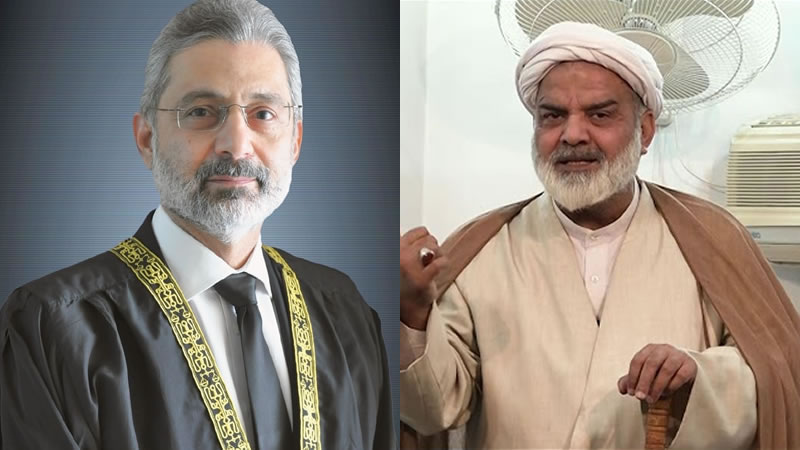 The Supreme Court of Pakistan has turned down an unconditional apology of cleric Agha Iftikhar-ud-Din Mirza for slandering judiciary and threatening Justice Qazi Isa, issuing a contempt of court notice to him.

According to details, a two-member bench comprising Chief Justice of Pakistan Gulzar Ahmed and Justice Ijazul Ahsan heard the case. The attorney general and the lawyer representing Mirza appeared before the court.

Mirza’s lawyer informed the court that his client has apologised unconditionally in this regard. The Chief Justice remarked that there was no room for mercy in the case.

During the hearing, Justice Ahsan questioned whether such language could be allowed and if an apology can be accepted in such a case.

The chief justice remarked that there was “no room for mercy” in the case while Justice Ahsan said that the video “was not made by a child but by Mirza himself”.

The court further observed that Mirza had a YouTube channel and he earned money through it.

“Such curse words are not used even in the streets. Islamic scholars recorded such a video and then made it public. He [Mirza] accepted in front of the Federal Investigation Agency that he recorded the video in the presence of seven worshippers,” Justice Ahsan said.

The judge pointed out that on the one hand Mirza had accepted his crime by submitting an apology but he still claimed he had not committed a crime.

During the proceeding, the attorney general remarked that Mirza deliberately passed the comments by taking judges’ names, so it cannot be an unintentional move.

The two-member bench has directed the cleric Agha Iftikhar-ud-Din Mirza to respond in seven days and to personally appear in the next hearing. The case was adjourned until July 15.