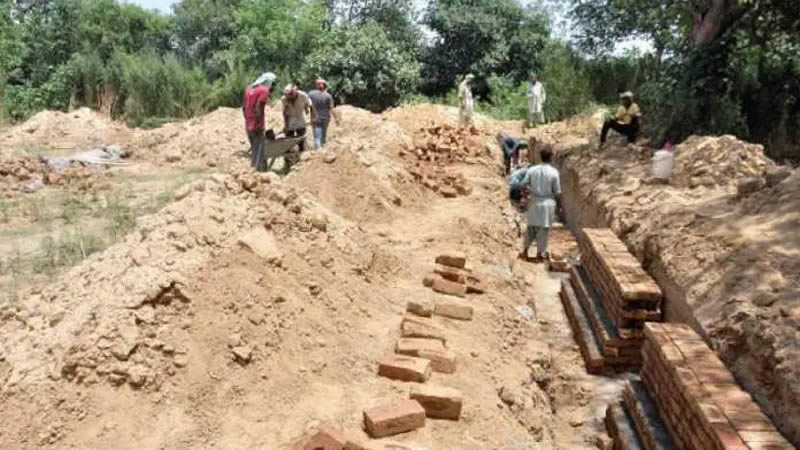 IHC Justice Aamer Farooq, however, dismissed objections over the allotment of the temple’s plot.

The government allotted the plot measuring 3.89 kanals for the temple in January 2017. The plot was handed over to the Islamabad Hindu Panchayat (IHP) in 2018.

The petitioners questioned the allotment of the plot on the basis that the same is not provided for in the city’s master plan.

The court noted that “the referred objection has no basis inasmuch as designated plots are not provided in the Master Plan rather a broad outline of areas for various purposes is given. It is only later that through Layout Plans and the decisions by the Capital Development Authority through its Chairman/Board that it develops Sectors and Sub-Sectors and designates plots.”

A representative of the Capital Development Authority and its counsel submitted that Sub-Sector H-9/2 has plots allocated for graveyard of minorities, hence on that basis the allocation was made. It seems that the allottee, namely IHP, did not adhere to the Rules and Regulations of the Capital Development Authority by submitting a building plan and seeking its approval and on the said basis the construction of the plot was stopped.

“Even otherwise Capital Development Authority is entitled to take appropriate action in accordance with the term of the allotment (Clauses 3 and 24 of Allotment letter dated 26.12.2017) and its laws for violation of the terms of allotment, if any,” the court order read, adding: “The fact remains that no construction at present is taking place at the site, in question and is unlikely to commence till compliance is made with terms of allotment and Capital Development Authority laws.”

As noted above, the Capital Development Authority is still to approve the building plan as and when the same is submitted and while doing so can holistically review the matter. It is an admitted position that no construction on any site can commence by any allottee/lessee unless it complies with the Rules and Regulations of Capital Development Authority, the order states.

The counsel for the petitioner contended that permission by the federal government and funding of the construction of Mandir in Islamabad Capital Territory is in violation of Article 2-A of the Constitution of Islamic Republic of Pakistan, 1973. It was further contended that no new church or temple or any place of worship for non-Muslims can be established in light of Hadiths on the subject.

The petitioner contended that there are already three temples in the areas of Rawalpindi and Islamabad Capital Territory, which duly cater to the needs of the Hindu community in the area. It was further contended that allocation and funding by the federal government for construction of the Hindu temple, especially in the times of the Covid-19 pandemic, amounts to wasting public money.

The counsel for the Capital Development Authority argued that the land was allotted for establishment of a temple community centre and cremation to the Islamabad Hindu Panchayat on Dec 26, 2017. It was submitted that in the subsector H-9/2, Islamabad graveyards of the minorities are situated on land/plot allotted by the Capital Development Authority and the referred sub-sector is designated for such purposes.

It was further contended that the construction commenced, but it was stopped by the Capital Development Authority as no formal approval of the building plan was obtained from the competent authority. It was reiterated that the plot was not allotted solely for a temple, but the site is to include temple, community centre and the place for cremation.

Deputy Attorney General Raja Khalid Mehmood Khan representing the federal government contended that no funding had yet been disbursed by the federal government for the purpose of temple’s construction. It was further submitted that the matter has been referred to the Council of Islamic Ideology for seeking its opinion regarding funding of money for the purpose of the temple’s construction and this fact was confirmed by a representative of the Ministry of Religious Affairs and Interfaith Harmony.

It was submitted that, otherwise, there was no bar for the allottee to construct the temple on its own in light of the fact that under Article 20 of the Constitution of Islamic Republic of Pakistan, 1973, the minorities are entitled to profess, practice and propagate their religion with freedom which is subject to law, public order and morality.

The court noted that “in so far as funding for the construction of Temple, Community Centre and place for Cremation qua Hindu Community is concerned, the Federal Government has already referred the matter to Council of Islamic Ideology and no amount has yet been disbursed as submitted by Representative of Ministry of Religious Affairs; hence the grievance of the petitioners on the specific issue stand allayed and has become infructuous, for the time being.”

Another Flour Crisis in the Making

Coronavirus May Never go Away: WHO

Coronavirus May Never go Away: WHO