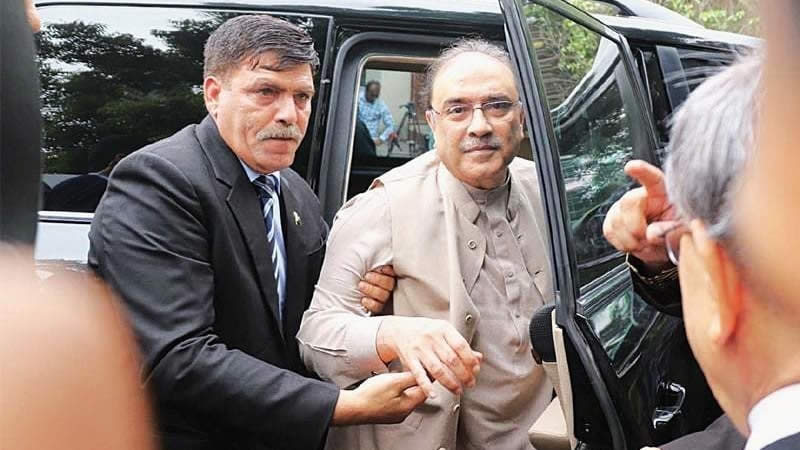 An accountability court of Islamabad on Monday indicted former president Asif Ali Zardari and other Park Lane case suspects in the absence of his counsel after the ex-president pleaded not guilty and claimed that he was being victimised and pressurised for being the architect of the 18th Constitution Amendment.

The Pakistan Peoples Party (PPP) sharply reacted to the framing of charges against Mr Zardari in the absence of his lawyer, Farooq H. Naek.

The former president said the National Accountability Bureau (NAB) had instituted politically motivated cases against him. In the past, too, they had implicated him in false cases and detained him for over 11 years without conviction, but later sought forgiveness, he said.

Mr Zardari then requested the judge to examine his case purely on merit.

Though the accountability judge assured him of fair trial, he issued the charge-sheet despite repeated requests by the former president that as his lawyer was not present and that he may not be indicted in the defence counsel’s absence.

Mr Zardari later insisted that the judge mention in the order sheet that his lawyer was not in the courtroom when he was indicted in the case.

The court then directed the prosecution to produce evidence on September 1 to prove the allegations levelled against the suspects.

According to the charge-sheet, Mr Zardari has been accused of being involved “in extending loan and its misappropriation by M/s Parthenon Private Limited, M/s Park Lane Estate Private Limited and others”. The charge-sheet also accused him of using his influence as president of Pakistan to secure a Rs1.5 billion loan for M/s Parthenon that according to the prosecution was the proxy of M/s Park Lane. The amount was deposited in fake accounts for money laundering, the prosecution said.

While PPP Senator Sherry Rehman criticised the framing of charges against the former head of state in the absence of his lawyer and said it was tantamount to trampling of fundamental rights, the party’s secretary general Syed Nayyar Hussain Bukhari pointed out that the Human Rights Watch (HRW) and other international organisations had already questioned NAB’s role in political engineering. However, he expressed the hope that Mr Zardari would prove his innocence as he did in the past.

Legal experts are of the opinion that the presence of counsel at the time of indictment is not a requirement of the criminal procedure code, but the judge for the sake of fair trial should ensure that the defence counsel is present.

An associate of Mr Naek told Dawn that he was scheduled to appear before the Chief Justice of Pakistan in the Supreme Court registry at Karachi.

He said Mr Naek was in Karachi and he was the counsel in four different cases fixed before the CJP.

According to him, the list of cases fixed before the apex court’s Karachi registry in which Mr Naek was the counsel was also submitted to the accountability judge.

Senior lawyer Mohammad Akram Sheikh says Article 10 and 10-A of the Constitution is very clear. The judge read out offences that entail up to 14 years imprisonment, therefore, the presence of defence counsel was mandatory, he says, adding that due to the absence of Mr Zardari’s lawyer, this might be a defective indictment.

Former additional attorney general Waqar Rana says that presence of accused is mandatory for indictment under the criminal procedure code and the counsel should accompany the accused at the time judge read out charge so he can consult his lawyer whether or not he would plead guilty. However, he explains, if the judge believes that the defence lawyer deliberately absented himself just to delay the indictment, the judge may take appropriate decision to conduct the trial.

Earlier on August 7, Judge Mohammad Azam Khan of the accountability court rejected the petition seeking acquittal of the ex-president and fixed the date for his indictment. In the written order, the judge stated that the counsel for Mr Zardari was supposed to rebut the arguments of deputy prosecutor general, but at the final juncture he submitted the application for withdrawal of the acquittal plea.

“The court has heard almost complete arguments from both the sides on the above said application and as well as upon application on point of jurisdiction the prayer in both the applications are almost same, hence, the application for withdrawal is dismissed being showing no cogent reasons and seems nothing just to delay the proceedings” the judge stated in the August 7 order.

When Judge Khan resumed proceedings on Monday, some staff members of the accountability courts in Karachi were deputed at the National Institute of Cardiovascular Diseases (NICVD) and Bilawal House, Karachi, from where Omni Group chief Anwar Majeed and the former president joined the proceedings via the video link facility, to verify their identification and inform the trial court accordingly.

The video link arrangements had been made by the NAB on the instructions of the trial court judge.

The other suspects Sher Ali, Farooq Abdullah and Saleem Faisal were present at the registrar office of the accountability courts, Karachi.

After the framing of charges against Mr Zardari, Mr Majeed and three others present in Karachi through the video link, the court summoned the prosecution witnesses, Ahsan Aslam, Nabeel Zahoor and Abdul Kabir, for September 1 and adjourned further proceedings.