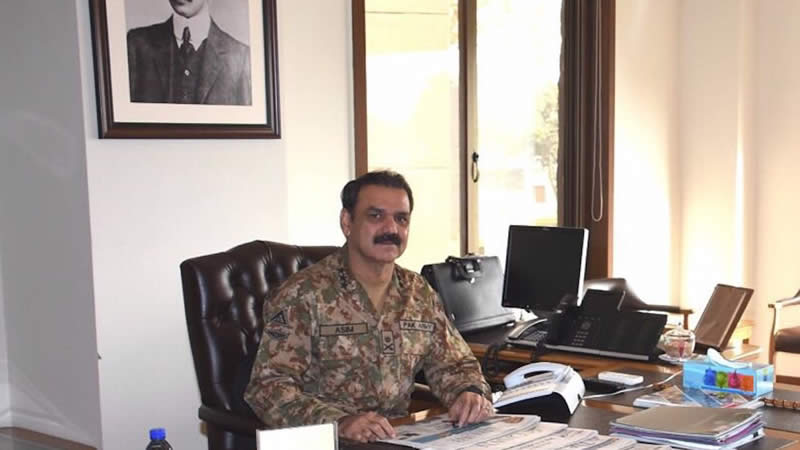 Lt Gen (retd) Asim Saleem Bajwa has decided to step down as a top prime ministerial aide shortly after coming clean on scandalous allegations of assets concealment in a detailed rebuttal shared on the popular micro-blogging site Twitter.

Asim Bajwa announced that he would resign as special assistant to the prime minister on information and broadcasting, but would continue as chairman of CPEC Authority in a move that political commentators say puts the media buzz to rest and reflects the change and is a must to ensure all are equal before the law.

“I want to focus fully on CPEC projects,” he said in television interviews Thursday night. “CPEC projects are the country’s future,” he added. SAPM Asim said he would submit his resignation to Prime Minister Imran Khan on Friday. “I hope the prime minister will allow me to dedicate my full attention to CPEC projects.”

Political analysts believe Lt Gen (retd) Asim’s move has set an excellent precedence in a country where the ruling elite always resorts to mudslinging and buck-passing instead of facing up to the charges against them.

Lt Gen (retd) Asim did not indulge in political rhetoric since the levelling of the blatant allegations against him and his family in a news report published on an “obscure” website. He took practical steps which, political observers say, reflect the high moral standards of the institution he has served for decades.

It is also in sharp contrast to the mobbing of the national institutions by supporters of convicts in attempts to cast aspersion on their credibility instead of coming clean about their deeds.

Asim Bajwa’s decision to resign came shortly after he issued a detailed rebuttal to the allegations against him and his family. “I have not shied away to explain the allegations shamelessly levelled against me. These allegations have been hurled at me to tarnish my image,” he wrote in a four-page press release.

The former chief military spokesperson “vehemently denied” the contents of the news report by journalist Ahmad Noorani published an “unknown” website on August 27, 2020 as “incorrect and false”.

“’It has been alleged that] my declaration of assets and liabilities as an SAPM in the federal government dated 22.06.2020 is incorrect because I have failed to disclose the investment of my wife abroad,” he noted.

“[It has also been alleged that] my brothers have conducted businesses in the USA and their growth of business is relatable to my promotion in the Pakistan Army,” he added.

He further pointed out that random mentions had been made of companies, businesses and properties, owned by his brothers and children, with sweeping allegations regarding their evaluation and propriety.

He noted that the first allegation was that his declaration of assets and liabilities as an SAPM on June 22, 2020 suffered from the omission of investment of his wife abroad.

“On the date of filing of the declaration, my wife was no longer an investor or shareholder in any business of my brothers or anyone else, abroad,” he clarified, adding that the allegation was “materially false”.

He clarified that his wife had disinvested all her interests as of June 1 this year in any entity abroad and this fact had been duly documented in the official records in the US.

The company registered in the SECP was a liaison office of the companies in the US.

Lt Gen (retd) Asim added that the process of change of name in the SECP in Pakistan had been conducted in due course, but that was only a ministerial function since the interest in the parent companies in the US stood no more in the name of his wife as on June 22, 2020, when he had filed the declaration of his assets and liabilities as an SAPM.

“Without prejudice to the above, if one were to look at the actual figures, the inescapable conclusion would be that the news item has been spread with a view to malign my reputation,” he added.

The CPEC Authority chairman further wrote that from 2002 to June 1 this year (18 years), the total out-of-pocket investment made by his wife in the companies of his brothers in the US had been $19,492.

“This investment was made by my wife through my savings spread over a period of eighteen years, all of which are fully accounted for. Not once the rules or regulations prescribed by the State Bank of Pakistan were violated.”

The SAPM then clarified his position on the “alleged investment of businesses” of his brothers in the Papa John’s pizza chain in the US and DQ and the UAE.

“The story asserts that Bajco Global Management, LLC is the parent company of all Bajco-related businesses,” he noted.

The retired lieutenant general maintained that the author of the news item had further made a false claim that Bajco owned 99 companies. “[The] author has listed many companies multiple times in his list. There are a total of 27 active companies in the US and two in the UAE,” he explained.

“In a span of eighteen years i.e. from 2002 till date my brothers purchased the franchise and assets related thereto and real estate to the tune of $70 million, out of which around $60 million were through bank loans and financial facilities.”

The SAPM said over a period of 18 years, the actual out-of-pocket cash investment into these businesses by his brothers and wife had been about $73,950.

Lt Gen (retd) Asim added that the cash contribution of $54,458 by his five brothers was fully accounted for and relatable to their own sources and resources.

“Any further investments, over and above the amounts referenced above, by my brothers and my wife were done by reinvesting their share of profits from the businesses itself and are also fully accounted for.”

“None of my brothers are my dependents,” he said, maintaining that their total out-of-pocket investment of $54,458 is fully documented and justified from their own sources. “Also kindly note that apart from my five brothers and my wife, the businesses has at least 50 other investors,” he added.

“One question that may be underscored is whether three persons who have worked in the USA up to the positions of a vice president in a US Bank, a controller in a restaurant operating company, and as an operating partner of a restaurant; and two persons having worked as doctors, would not be able to save $54,458.”

The former military spokesperson then went on to respond to allegations about the businesses his children.

“It has been alleged that one of my sons had owned a company by name of Scion Builders and Estates (Pvt) Ltd; which has been registered in the SECP,” he noted. “It may be stated that this company has never done any business and [the] same is dormant since [its] inception.”

The SAPM said it had been suggested that the company by the name of Himalaya (Pvt) Ltd was registered by one of his sons in the SECP.

“It may be pointed out that my son owns only fifty percent of the shares. This is a very small company and in the last three years has made a total cumulative profit of about less than Rs500,000.

Lt Gen (retd) Asim said the story also mentioned that a business entity by the name of Mochi Cordwainers existed in the name of one of his sons. “It is true that my son is the sole proprietor thereof, which is a small entity, but for the last five years the said business entity has made a total loss.”

He further said it had been alleged that one business entity by the name of Krypton was brought about by one of his sons that dealt in mines and minerals and was registered at the time when he was posted in Balochistan.

“Unfortunately, no one has bothered to find out that the said business entity is registered as a sole proprietorship in the FBR in 2019 but it has always been dormant and has not done any business. It has never opened a bank account or obtained a lease.”

On the allegation that a company by the name of Advance Marketing (Pvt) Ltd is owned by his son, the CPEC Authority chairman responded that it had been reported without bothering to find out that this company was also dormant and has never conducted any business.

On the accusation that a company, Scion Management Group LLC, owned by his sons, owned a house in the US, Lt Gen (retd) Asim said if the journalist in question had bothered to find out facts honestly, justly and fairly, he would have also found out that the house in question was only bought for an amount of $31,000 in a cheap foreclosure proceedings.

“[This] amount of S31,000 is fully justified by my two sons through their own independent sources. This is a small house.”

The SAPM said it had been alleged that one company, Scion Natura LLC, was formed by his two sons. “One should know that the same has always been dormant.”

On the “baseless allegation” that a business entity of his two brothers by the name of Silkline Enterprises (Pvt) Ltd had been formed to acquire CPEC contracts, Lt Gen (retd) Bajwa said the company had never acquired any CPEC contract.

The SAPM said one of his sons owned a house in the US but it had been acquired through mortgage in the manner that 80% of loan/mortgage remained unpaid. “This again is a small time-house,” he added.

“All my sons are above 18 years and none are my dependents. Mashallah their ages are 33, 32 and 27 years respectively. It shall be noted that my sons completed their business degrees from reputable universities in the United States and have had well-paying jobs.”