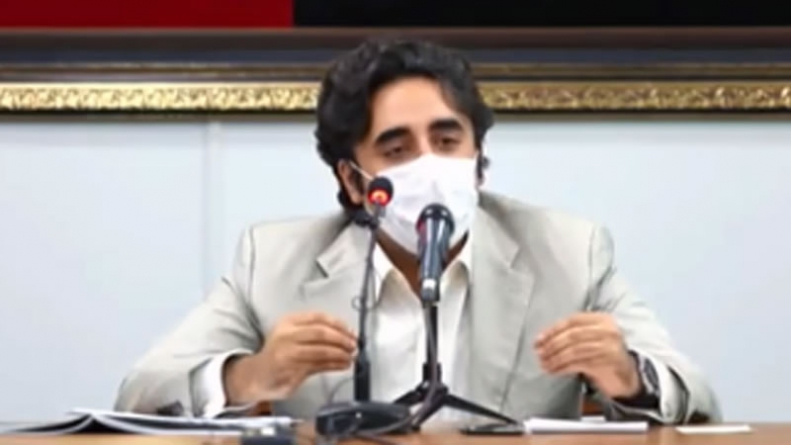 Sheikh Rashid should not be allowed to make the meeting of the national security controversial, says PPP chairman

Pakistan Peoples Party (PPP) Chairman Bilawal Bhutto-Zardari has said that the entire political leadership is united on national security issues and “the opposition is ready to extend full cooperation in this regard”.

Addressing a press conference in Karachi on Wednesday, he said that the upcoming elections in Gilgit-Baltistan (G-B) must be fair and free.

Criticising the present government, the PPP leader urged Prime Minister Imran Khan to step down as he has “utterly failed to deliver”.

“Pakistan needs a better person for that [PM’s] post so as to cater to needs of the people and the country.”

He said that the PPP had hosted all-party conference (APC) in Islamabad, which was a historic event participated by former prime minister Nawaz Sharif and former president Asif Ali Zardari and “they spoke to the hearts of the people”.

In the multi-party meeting, he said, they had chalked out an action plan against the PTI government with firm resolve to see that action plan implementation in letter and spirit.

The PPP chairman said that the Pakistan Democratic Movement (PDM) would carry out campaign against the incumbent “selected” government and its facilitators.

While brushing aside criticism on the Sindh government during the recent monsoon rains and flash floods, he said there was devastation everywhere due to the catastrophic rains and ensuing floods in his province.

“There are serious problems in Sindh province, in Swat, Khyber-Pakhtunkhwa, Gilgit-Baltistan as there are countless flood victims who are in dire need of relief.”

Bilawal said that the rains and floods have destroyed crops across Pakistan. In addition, the Covid-19 pandemic had already inflicted havoc while another locust attack completed the havoc as ready crops were smashed. “Crops of chillies, cotton and tomato vanished under the locust attack in Sindh and “thus the farmers suffered immensely”.

Bilawal, while speaking about the meeting of the national security, said it pertained about the country’s security and was held in-camera. “Such meetings should never let those irresponsible to be present there particularly those who have no stake in Kashmir or Gilgit-Baltistan.”

The premier did not attend the national security briefing, he said, adding that it should not have taken place without him and his absence is a complete failure on his part as the prime minister.