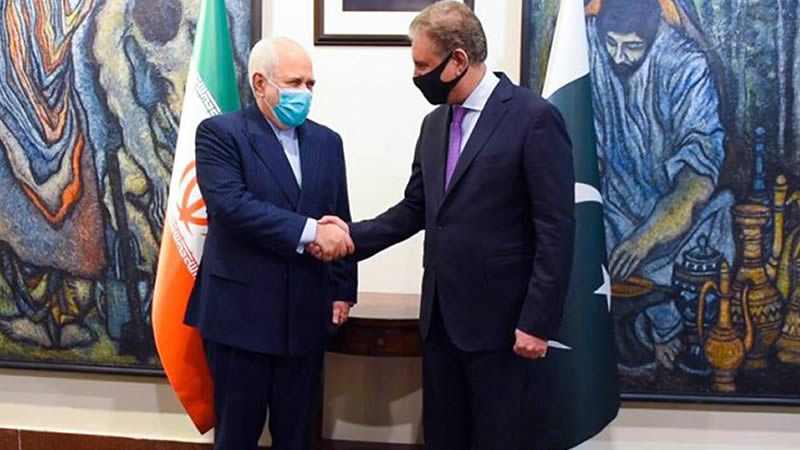 Iran’s Foreign Minister Dr Muhammad Javad Zarif said his country was ready to develop “comprehensive” relationship with Pakistan, as he held talks with senior civil and military authorities on Wednesday amidst new alignments in the region.

This was Zarif’s second visit to Islamabad in six months and came against the backdrop of new alignments in the region.

In the past, visiting Iranian officials rarely interacted with the military leadership in Pakistan but that was not the case anymore. There has been an increased interaction between the two countries not at the civilian levels but also on the military front.

The prime minister also emphasised the need for enhanced bilateral cooperation with special emphasis on bilateral trade and economic relations. He underscored the need to work closely for promoting peace, security and development in the region.

Highlighting Pakistan’s efforts towards facilitating peace and stability in Afghanistan, the prime minister said there is no military solution to the Afghan conflict.

He reaffirmed Pakistan’s support for Afghan-led and Afghan-owned peace process and hoped that this historic opportunity would be seized by all Afghan parties to secure a political settlement.

Imran further said that that peace in Afghanistan would be beneficial for the entire region as it would create new opportunities for trade and economic cooperation as well as regional connectivity.

He also reaffirmed Iran’s steadfast support for the Kashmir cause.

The two sides issued separate statements after Zarif’s meeting with Foreign Minister Qureshi and the army chief. The official handouts from both sides underlined the need for close cooperation between the two countries and expansion of ties in all spheres.

The Iranian Embassy said during the meeting between Qureshi and Zarif, the two sides discussed the development of bilateral political, economic and international cooperation. Dr Zarif referred to the deep historical and cultural interests between the nations of Iran and Pakistan. He expressed the readiness of Iran to comprehensively develop relations with Pakistan.

Referring to the decision of the Iran to develop border crossing points with Pakistan, the minister of foreign affairs welcomed the decision of the government to open new border markets to develop trade relations between the two countries and announced his country’s readiness to agree on new models of trade.

Qureshi also mentioned Iran as an important friend and neighbour of Pakistan and informed Zarif about the practical steps taken by the Pakistani government to promote the bilateral trade and economic cooperation.

Referring to the importance of strengthening the security of the borders, Dr Zarif stressed the need for continuous consultations in this regard. Qureshi said that the Pakistani government had decided to promote cross-border trade between the two countries.

The Pakistani foreign minister stressed the importance of establishing peace and security on the Iranian-Pakistani border and stressed that the country would not allow hostile actions against Iran.

Regional developments, issues of the Islamic world, countering Islamophobia, regional cooperation, especially the strengthening of the Economic Cooperation Organisation (ECO), joint fight against terrorism and illegal immigration, and facilitating pilgrimages were among the other topics discussed by the two foreign ministers.

The formation of a joint economic commission in the near future was also among the issues taken up during the talks and agreement was reached between the two foreign ministers.

A separate statement issued by the Foreign Office said that Qureshi underscored the importance Pakistan attached to its relations with Iran as a fraternal country and important neighbour. The two foreign ministers reviewed all aspects of bilateral relations and exchanged views on regional and international issues.

Qureshi extended condolences over the loss of precious lives in Iran due to Covid-19 and commended the Iranian government’s efforts to contain the pandemic. The foreign minister emphasised the importance of optimally utilising the existing bilateral mechanisms to increase cooperation in the areas of trade, investment, connectivity, security and people-to-people exchanges and to strengthen mutual collaboration in multilateral fora. In this regard, he underlined the need for regular interactions at multiple levels.

On Afghanistan, the foreign minister underlined that peace in Afghanistan was paramount for sustainable stability and prosperity in the region. Reaffirming Pakistan’s support for Afghan-led and Afghan-owned peace process, Qureshi highlighted Pakistan’s positive contributions.

He added that the intra-Afghan negotiations (IAN) offered a historic opportunity which all sides must seize to secure an inclusive, broad-based and comprehensive political settlement. The two sides agreed to close coordination to support efforts for peace and reconciliation in Afghanistan.

On behalf of the people of Pakistan, the foreign minister conveyed deep appreciation for the Iranian supreme leader’s steadfast support for the Kashmir cause.

The two foreign ministers exchanged views on the rising Islamophobia in different parts of the world and agreed to undertake efforts to counter this negative trend.

Meanwhile, during the meeting between Zarif and the Army Chief, the two sides, while expressing satisfaction with the political, military and regional cooperation between the two countries, emphasised the expansion of relations in all dimensions.

Zarif pointed to the good military cooperation between the two countries and praised the measures taken at the border to strengthen border security, and the opening of a new border crossings. He announced that Iran would open the crossing corridor next week.

Zarif expressed the hope that the Gabd crossing will be reopened by the Pakistani side, and that other border crossing paths would also be reopened to expand public and commercial ties between the two countries.

While acknowledging the importance of political and military cooperation between the two countries, Gen Bajwa stressed the need for expanding cooperation in all dimensions, and supported the Pakistani government’s decision to open a border bazaar and various crossing points, including the Rimdan-Gabd and Pishin-Mand crossings.