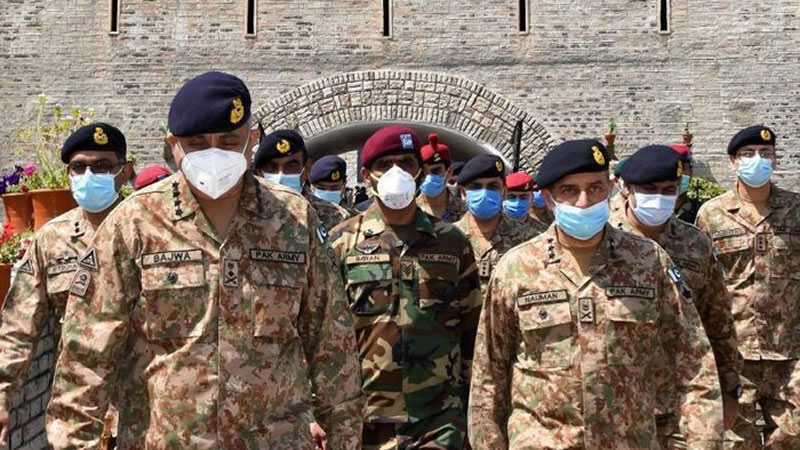 Amidst a possible threat of another attempt by India to conduct a surgical strike inside Pakistan’s territory, Pakistan Army has been put on high alert.

They said that after facing humiliating defeat in Ladakh and Dokalam, India was preparing to launch another attack on the Line of Control (LoC) and across the Working Boundary at Pulwama, posing a threat to the regional peace and stability.

The Inter Services Public Relations in a tweet identified the soldiers as Lance Naik Tariq, 38, and Sepoy Zaroof, 31. Pakistani forces responded befittingly to the ceasefire violations, added the ISPR.

An official said a “false flag operation” was being planned by India to divert the world’s attention from several of its internal issues, including the ongoing farmers’ protest, its treatment of minorities, atrocities committed by Indian forces in occupied Kashmir and criticism of its policies by international institutions and media.

“India may at any time repeat a Pulwama-like drama to divert attention from the internal problems and was planning an action along the LoC and Working Boundary,” he said.

In 2016, India had claimed to have carried out a surgical strike on the LoC, a claim rubbished by Pakistan. Similarly, on Feb 26 last year, India had tried to launch a similar operation against Pakistan but failed and two of its planes had been shot down by Pakistan Air Force. Indian pilot Wing Commander Abhinandan was arrested and later released.

The decision to put the army on high alert comes days after the Indian government approved the creation of a new post of deputy chief of strategy at the army headquarters as per a plan envisaged during the Doklam crisis with China in 2017, besides creating the position of director general information warfare who will also be dealing with media affairs.
‘Is India becoming a fascist state?’

In a related development, speakers at a global virtual seminar on Wednesday discussed the question, “Is India becoming a fascist state?” in response to the rising authoritarian tendencies of the Modi government and human rights violations in the country.

“The erosion of civil liberties, the aggression of police and the increasing politicisation of the judiciary mean that people are now seriously asking, ‘Is India slipping towards fascism? As a friend of India, Australia and Australian politicians should support those voices from India and the diaspora who commit to our shared values of democracy, liberty and rule of law,” NSW MP David Shoebridge said in his opening statement on the significance of the event.

Greens Foreign Affairs spokesman and Federal Senator Janet Rice said that human rights were fundamental and must be protected in all countries and for all people.

“Sadly in India, as in many countries around the world, people’s human rights are frequently not respected. We are particularly concerned at the impacts on religious minorities, political opposition groups, indigenous peoples and other vulnerable communities,” he added.

He said the forum was an important opportunity to hear from human rights advocates and a range of voices from around the world.

Australia’s former senator Lee Rhiannon said there has been an alarming decline in democratic and secular standards in India. “I am often asked ‘Is the Modi government promoting a fascist vision for India?’ I understand why people ask this question,” she wondered.

Ms Rhiannon said massive detention centres have been constructed in India for the millions deemed to be non-citizens under new laws. “Minorities are being killed. In occupied Kashmir, in addition to the unilateral abrogation of Article 370 of the Indian constitution, the entire population of the region has been deprived of their right to freedom of expression and opinion through protracted communication restrictions, in place for the past year. These actions are compounded by a censored media, continuing detention of political leaders and a compromised judicial system. This forum is timely. The global community needs to be informed,” she added.

Shaffaq Mohammed, a British politician of Kashmiri heritage who served as a Liberal Democrat Member of the European Parliament (MEP) for the Yorkshire & Humber region from 2019 to 2020, compared the fascism in Europe that led to the killing of around six million Jews and the ideology of Hindutva targeting minorities in India, especially Muslims.

He talked about the brutal lockdown now for more than a year imposed in Indian Illegally Occupied Jammu and Kashmir following the revocation in August 2019 of Articles 370 and 35A that gave the region special status and autonomy.

In January this year, Shaffaq Mohammed was the lead proposer of a resolution against the Indian Citizen Amendment Act that gained the support of the main five political groups that made up the 750-seat European Parliament.

US Congresswoman-elect Marie Newman, who won election in Illinois’s 3rd congressional district to the United States House of Representatives as the Democratic nominee, talked about the change in the US and assured her full support to rights groups calling for accountability of the Indian government with respect to human rights in the country.

Suchitra Vijayan, the founder and Executive Director of The Polis Project who writes about war, conflict, foreign policy, politics, literature and photography, listed the increasing fascist policies of the Modi government and its total control on the judiciary, law enforcement and mass media in India in order to suppress the voices of dissent in the country.

Raju Rajagopal, co-founder of Hindus for Human Rights, talked about the cooperation of civil society activists from Indian diaspora to coordinate their efforts on a global level fighting against Hindutva ideology and creating awareness of human rights abuses in India by the Modi government amongst the international community.

Professor Anjali Arondekar, a professor of Feminist Studies and director of Centre for South Asian Studies, University of California, Santa Cruz, talked about the caste-based politics in India and discrimination, oppression and marginalisation of low caste Indians and other minorities, including Muslims, by the incumbent BJP government.

The round table was organised by a broad international coalition comprising Australia-based The Humanism Project, Indian American Muslim Council, Hindus for Human Rights, US, and Amnesty International, Australia.