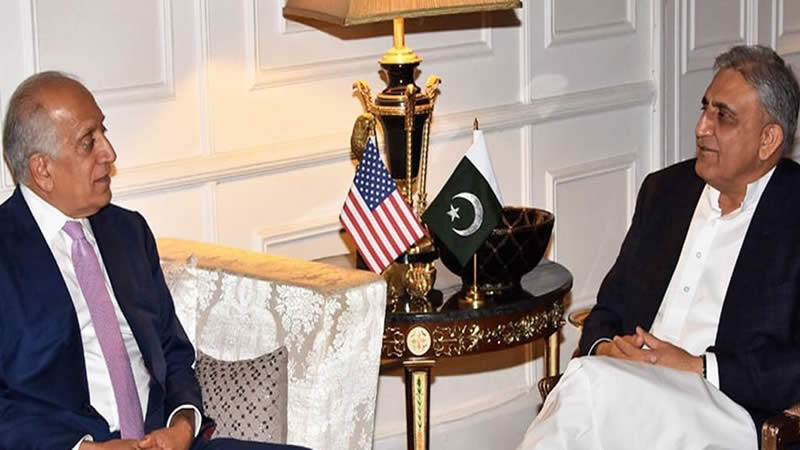 Ambassador Zalmay Khalilzad, US Special Representative for Afghanistan Reconciliation, met Army Chief General Qamar Javed Bajwa on Monday to discuss the Afghan peace efforts as the US voiced concerns over the 20-day break in negotiations between the Afghan government and Taliban taking place in Doha.

The US top diplomat and General dashed to Pakistan against the backdrop of 20-day break taken by both Afghan government and Taliban in negotiation process. The two sides after months of talks in Doha recently agreed on the rules of engagement to discuss the most substantive issues including the political road map and comprehensive ceasefire.

But Khalizad in a series of tweets expressed concern in the break in talks, insisting the current situation required urgent progress on ceasefire and other issues.

“The two Afghan negotiating teams announced in Doha they will take 20 days off to consult on the agenda items,” he said.

“Tragically, the war continues. The need for a political settlement, reduction in violence, and a ceasefire remain urgent,” he stressed.

The US envoy further said given how much was at stake, it was imperative that there was no delay in resumption of talks and they must resume on Jan 5 as agreed.

It is believed that Khalilzad sought Pakistan’s help to ensure that the intra-Afghan talks are not delayed any further.

A statement issued by military’s media wing, the ISPR, said matters of mutual interest including overall regional security situation with particular reference to ongoing Afghan reconciliation process were discussed during the meeting.

“Visiting dignitary appreciated Pakistan’s untiring efforts for facilitating the process towards the mutual objective of peace in the region,” the statement added.

Pakistan facilitated a landmark deal between the US and Taliban signed on February 29. The deal envisages a road map of US troops’ withdrawal in return for Taliban promising not to let Afghan soil ever used again by terrorist groups.

But the deal hinges on the success of intra-Afghan dialogue, which will decide the political future of Afghanistan and pave way to end the 19-year old conflict.

US Panel Endorses Widespread use of Pfizer Covid-19 Vaccine