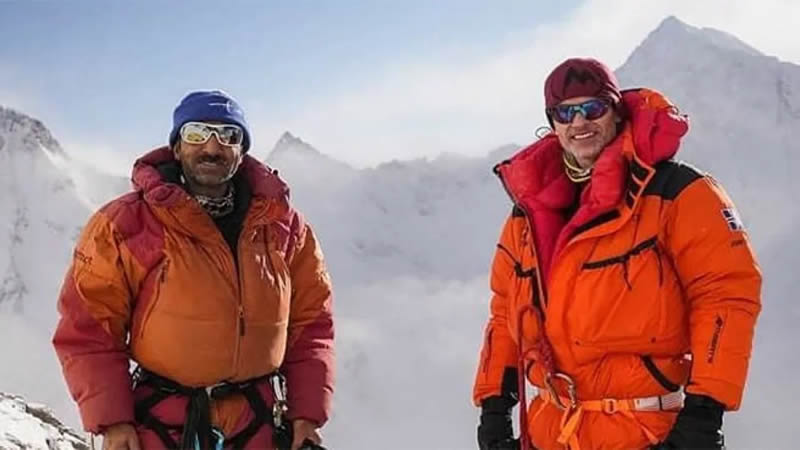 The chances that missing Pakistani mountaineer Muhammad Ali Sadpara, who had set off on a mission to climb to K2’s summit, has survived are very slim, his son told the media on Sunday.

In a conversation with reporters in Skardu, Sajid said: “Rescue operations now only make sense if they are carried out to bring back his body. Otherwise, for the chance for anyone to survive at 8,000 metres [after being missing for] two to three days are next to none.”

Sajid said that a team of four climbers began their climb at around 11pm-12am on February 5 (the night between Thursday and Friday).

“Unfortunately, I was without oxygen and at a height of about 8,200 metres in the winter. I felt like my health is getting affected as well as my mental well being.

“My father said he is carrying another oxygen tank which I should use. But as I began fitting the oxygen mask regulator, it leaked. So I came down,” he narrated.

Sajid said that the last time he saw his father was at the bottleneck at around 8,200-8,300 metres, the most “technical portion” of the climb, at around 11am on Friday.

“I’m sure he summited the peak and was on his way back after which he encountered an accident which is why he is missing,” he said.
Sajid arrives in Skardu

The Deputy Commissioner of Shigar had earlier confirmed the safe arrival of Sajid Sadpara in Skardu.

He said helicopters had searched the area with Sajid and Dawa Sherpa who was leading the K2 winter expedition, up to an elevation of 7,800 metres but “found no clues due to bad weather”.
Mountaineers go missing

Sadpara and two other mountaineers with him — John Snorri from Iceland and Juan Pablo Mohr from Chile — had gone missing on Saturday after which a search operation to retrieve them was launched.

Helicopters flew to a height of 7,000 metres on Saturday afternoon in their attempt to locate the missing mountaineers but were unable to find any clue to their whereabouts.

It had been reported two days ago that Sadpara and his team had successfully summited the 8,611-metre K2 — the world’s second highest mountain — late Friday, a month after their first attempt failed.

However, their support teams had since then cautioned that the climbers’ status is unclear and there has been no communication from their end since Friday.
Sadpara’s son safely reaches camp

On Saturday afternoon, Waqas Johar, Assistant Commissioner Shigar, Gilgit-Baltistan, said that there has been no success in finding the missing mountaineers so far and that weather conditions are “not good” at K2.

He said that Ali’s son, Sajid Sadpara, who had been waiting at Camp 2 has now begun to descend.

In a subsequent update, he said that Sajid has reached Camp 1.
Mountaineers set off on journey

Sadpara, Snorri and Mohr had departed for their journey a day after Sadpara’s birthday in the wee hours of Wednesday, asking fans and admirers to “keep us in your prayers”.

They had started their attempt for the final summit in the early hours of Friday, hoping to accomplish the herculean feat by Friday afternoon.

According to updates posted on Snorri’s facebook account on Friday, at 12:29pm, the GPS stopped working and had not updated in six hours.

It stated that Sajid had to return due to his oxygen regulator not working. “They were at a bottle neck at around 10am,” the account said.

Citing feedback from Sajid, the account stated that everyone was fine otherwise and going at a good pace until he had been with them.