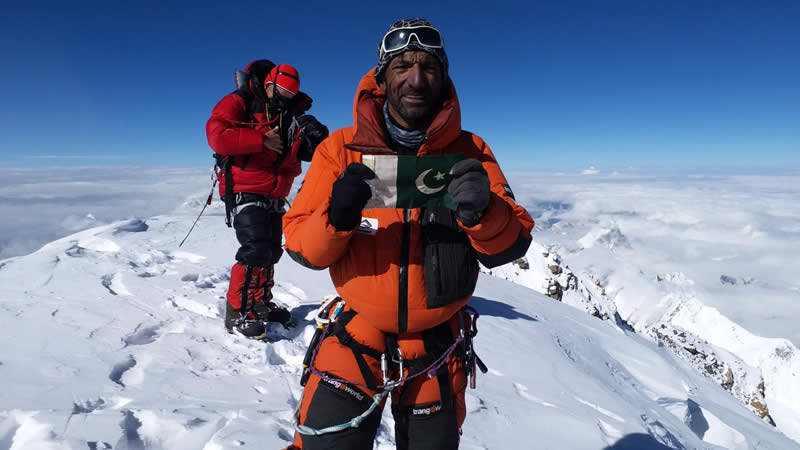 Renowned Pakistani mountaineer Muhammad Ali Sadpara — along with climbers from Iceland and Chile — are reported missing during his winter climb on K2 and contact with the 3-member expedition has not been established since Friday.

Sajid Ali Sadpara — son of renowned Pakistani mountaineer — said that the chances of the three climbers returning alive after three days were “next to none” under such harsh conditions. The rescue and search team of the Pakistan Army using helicopters started the mission on Saturday in extremely challenging weather and flew as high as 7,000 meters but unfortunately have not spotted anyone thus far, officials said.

Many, including celebrities, took to social media and prayed for their safe return. Armeena Khan, Minal Khan, Mansha Pasha and others hoped the missing mountaineers would come home safe and sound.

“Praying and hoping for the safe return of our mountaineer Ali Sadpara along with the rest of the team,” the Laal Kabootar star penned. Later, she went on to add, “Ali Sadpara may not return. But we can honor his memory by supporting, highlighting the achievements of all athletes in Pakistan, not just cricketers. Let us not wait for them to leave us to realise their worth. Still praying for a miracle. May he return safely.”

Mehwish Hayat, too, hoped for a miracle, as she prayed for Sadpara’s safe return. “Tonight our thoughts are with the intrepid climbers, Muhammed Ali Sadpara, John Snorri from Iceland & MP Mohr from Chile who remain missing on K2. Let’s all pray for the safe return of these brave men,” wrote the Load Wedding actor.

Sharing a link to a documentary about K2 and its hurdles, Armeena said, “The Pakistani porter is paid 700 rupees per “stage” (there are at least 10). He has up to 45 kgs on his back, wearing inadequate clothing, broken sandals/no socks on rock and ICE. If there is something you are going to watch tonight.”

“Ali Sadpara, a known mountaineer in Pakistan, who was on a mission to raise the green flag on K2 has gone missing with his team,” the Jalan star shared on her Instagram story. “Search parties are looking for them. Please, everyone, say a prayer for their safe return. Prayers can do wonders.”

Fahad Mirza took to Instagram and said he is ‘hoping against hope that they are found.’ “May Allah preserve and protect Muhammad Ali Sadpara and his team,” he wrote.

Earlier, while talking to the media after the end of the second-day rescue mission in Skardu, Sajid suggested that the three climbers may have had an accident while descending from the K2 “Bottleneck”, considered the most dangerous route of the entire expedition.

“There is no hope to live [under such harsh conditions] for three straight days,” Sajid said. “When I returned from Bottleneck at 8,200 meters, they were climbing up the Bottleneck at 11 am [on Friday]. I’m sure they made the K2 summit and on their way back they may have had an accident, that’s why they are missing,” he added.