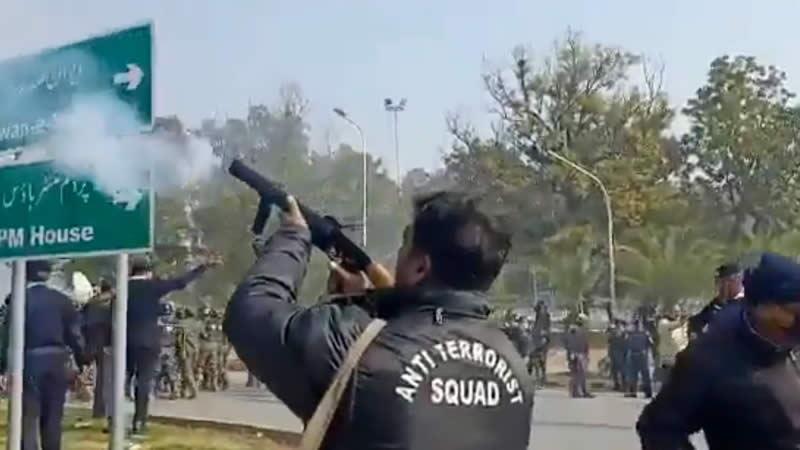 Capital police resorted to tear gas shelling near the Pakistan Secretariat on Wednesday as they tried to push back government employees who were protesting for a pay rise.

Several employees were arrested and those stuck in the Secretariat Block broke the door to escape.

Protests were being held at several different points of the city, including Constitution Avenue, outside Secretariat Block and Cabinet Block.

A protest was also held outside the National Press Club, which was joined by employees posted in Balochistan and Punjab. Later, the protesters started a march towards the Parliament House.

Several government employees are protesting against the government over different issues.

Police placed containers on the roads, sealing off D-Chowk.

Islamabad Deputy Commissioner Hamza Shafqaat was also at the scene and was overseeing the situation.

“The morale of the police is high [and] the situation is completely under control,” the statement said.

“Action will be taken against the ones who took law in their hands,” the statement read further.
Govt stance

Addressing a press conference in Islamabad, Information Minister Shibli Faraz said that the prime minister was “very concerned” about the issues being faced by government employees and the situation in the Red Zone.

He stated that the premier has directed the ministries concerned to resolve the employees’ issues immediately. “He is very serious about this and wants the issues to be resolved,” he said, adding that a three-member government committee will address a press conference soon.

“I think that the protest will end today,” he said.

Addressing a press conference later in the day, Defence Minister Pervez Khattak, who is part of the committee holding talks with the protesters, said that the government wanted to give the employees a special allowance for the months before June.

A commission is also looking at the issue and will give a decision before the budget is announced and the problem will be solved, he added.

Sharing details of talks with the protesters, he said: “When [talks] started, we said we will give 24 per cent but they demanded [much more]. Calculations are being done [and] we are ready to talk.”

However, Khattak warned that the “government has limits” and it was ready to give increments according to what was suitable keeping in view the condition of the country and the treasury but “if they want it [on their own terms], it will be difficult”.

The minister said the government was “still ready to talk” to the protesters if they brought their demands within limits.

He said another issue that had emerged was that government employees from provinces had also joined the protest, clarifying that the Centre could only do something if it was related to its own employees.

“Provincial problems are solved by provincial governments because, after the 18th Amendment, we cannot order them to increase salaries.”

Speaking after Khattak, Minister of State for Parliamentary Affairs Ali Mohammad Khan said the government was “not any less worried” for the protesters than they were themselves.

“A lot of things have been solved including upgradation and merger, only percentages are left. The committee is ready to give them relief for four months.”

Interior Minister Sheikh Rashid said the employees had the “right to protest within the limits of the law”. However, if political parties joined the protest and tried to “give it a political colour”, it would result in loss for the government employees.

He added that the government was “ready to issue notification of 25pc [increase] for employees from grade 16 to 22 whenever they say and would get it approved from the cabinet on Monday”.

“We have no connection with provinces [but] we will ask that their (protesters’) voices be heard.

“Centre’s full efforts will be to end this through consensus,” he said.
Bilawal condemns ‘violence’

Meanwhile, PPP chairperson Bilawal Bhutto-Zardari has condemned the arrests of and “violence” against the protesting government employees.

According to a PPP statement, he said the “selected government should accept the legitimate demands of the employees [and] the arrested workers should be released.”

Bilawal said the government instead of heeding the demands of the employees had resorted to “reliance on the use of power” against them.

He claimed that while the PPP during its government had doubled government employees’ salaries, the PTI government instead of giving concessions to workers had caused a “record increase” in inflation and “destroyed the economy”.

This is a developing story that is being updated as the situation evolves. Initial reports in the media can sometimes be inaccurate. We will strive to ensure timeliness and accuracy by relying on credible sources such as concerned, qualified authorities and our staff reporters.

Pakistan to spare no Effort to Trace Missing K2 Climbers