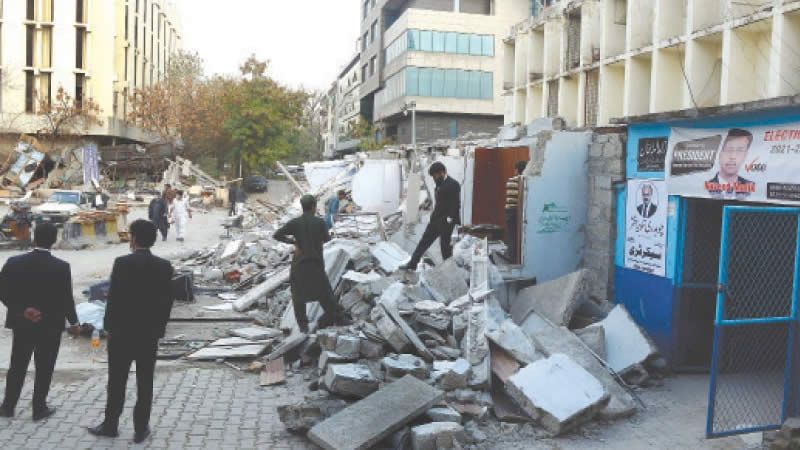 The Supreme Court has ordered the demolition of the illegal chambers of lawyers on Islamabad’s F8 football ground.

The top court upheld the verdict of the Islamabad High Court and dismissed the appeal filed by the Islamabad Bar Council. Earlier, the court had stayed the demolition till the hearing of the case.

The lawyers in the petition had asked for alternate space to shift their chambers. Their request has been rejected.

“All illegal chambers must be demolished,” said Chief Justice Gulzar Ahmed, adding that the lawyers don’t have any claim on the football ground. “If someone wants to practice, then that person can open their office somewhere else.”

Shoaib Shaheeh, the petitioner’s lawyer, said that many courts have also been built on the ground.

The top judge said that they should be demolished too.

The court has given the lawyers two months to move their chambers.

On February 26, Justice Ahmed said that the court won’t be pressured by anyone. Lawyers aren’t supposed to encroach on public land. The bar association does not have the right to lease out chambers to lawyers, he added.

On February 16, the Islamabad High Court announced a similar verdict.

A 30-page judgement of a larger bench, authored by Chief Justice Athar Minallah, said that their chambers are “illegal, void and without jurisdiction and authority”. The court noted that records show that office-bearers of the Islamabad District Bar had “allotted plots in favour of some lawyers for construction of private chambers” in 2017. The bar did not obtain any “permission or authorisation from the authorities”.

The bar members have been instructed to clear the “illegal construction” and “restore the playground for public use”.

The ground is situated “next to a commercial area where the administration of the Islamabad Capital Territory had rented privately-owned buildings more than four decades ago for establishing the District Courts,” the court said. “The playground was encroached, and some construction has also been raised by a few enrolled advocates for building their private chambers.”

The people from the neighbouring buildings use the playground for “unauthorised parking”, it said.
Lawyers vandalise Islamabad High Court

On February 8, the lawyers in Islamabad staged a protest after their chambers at the judicial complex were destroyed by the Capital Development Authority. They also stormed the chamber of Islamabad High Court Chief Justice Athar Minallah.

An FIR was registered against them at the Ramna police station. It included Section 7 [punishment for acts of terrorism] of the Anti-Terrorism Act and the following sections of the Pakistan Penal Code:

According to the written verdict issued by a 3-member bench hearing the misconduct case against the lawyers, “The mob, after breaking open the main door of the Chief Justice’s Block, resorted to vandalising and desecrating public property.”

“Later, the chief justice and judges were held hostage for more than four hours. The judicial proceedings remained suspended for the rest of the day. The litigants were deprived of their rights and thus dispensation of justice was disrupted,” the verdict read.

Senate Elections to be held Through Secret Ballot under Article 226: SC