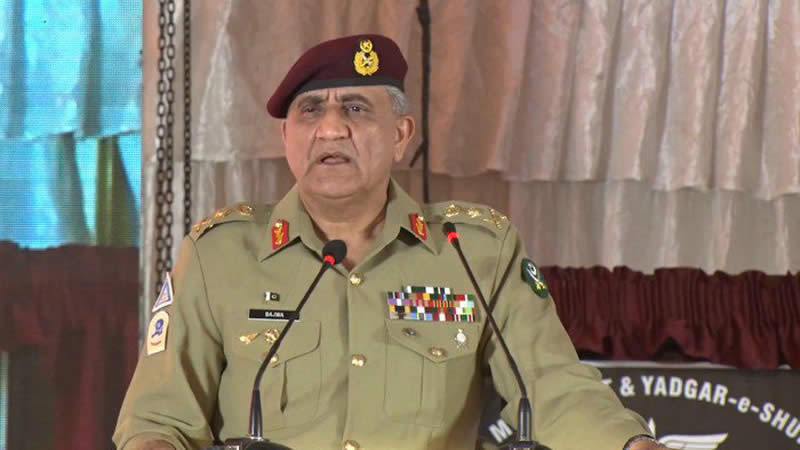 Army chief General Qamar Javed Bajwa has called for vigilance to thwart hostile attempts to create chaos in the erstwhile tribal regions of North and South Waziristan where a recent uptick in violence and deadly tribal clashes have set off alarm bells.

“Peace has largely returned to these areas. The hard-earned normalcy will be retained and enhanced through collective efforts of the local population, civil administration and law enforcement agencies (LEAs),” the army chief said while interacting with tribal elders at Mir Ali, North Waziristan, on Tuesday.

According to a statement issued by the military’s media wing, the ISPR, Gen Qamar appreciated the tribesmen for their unflinching support and sacrifices in the fight against terrorism. “We have to remain vigilant and steadfast to thwart hostile attempts to create chaos and reverse the gains of Operation Radd-ul-Fasaad,” he added.

“To continue the journey towards enduring peace and development we need to stay determined and united,” the army chief said.

Operation Radd-ul-Fasaad, which translates roughly to ‘elimination of discord’, was launched on February 22, 2017to indiscriminately eliminate the “residual/latent threat of terrorism”, according to the military.

Under this operation, as many as 750,000 intelligence based operations (IBOs) were carried out by the intelligence agencies – including the ISI, the MI, the IB – as well as police and other law enforcers – throughout the country, the chief military spokesperson told a news briefing last month.

“The IBO helped neutralise many terrorists and their supporters,” according to him.

The army chief spent the entire day with forward troops in Asman Manza, South Wazirstan and Mir Ali in North Wazirstan. While interacting with officers and men, he commended their commitment and professionalism in ensuring secure and conducive environment for implementation of the writ of civil administration in the newly-merged tribal districts.

The military spokesperson had told last month’s media briefing that “Pakistan’s grand strategy to counter terrorism includes clear, hold, build and transfer.” Since 2017, the entire focus has been on build and transfer. This would mean holding the “hard-earned gains” in the war against terrorism in order to enable the civilian administration to take control of these areas.

Pakistan has been fencing its porous border with Afghanistan in an effort to plug the gaps that terrorists use to sneak in from their sanctuaries in neighbouring Afghanistan to carry out attacks in Pakistan’s border regions. The fence has helped reduce the number of such attacks.

“Pakistan is committed to peace and stability in the region and playing its part by solidifying border security and capacity enhancement of FC/LEAs,” the army chief said on Tuesday during his Waziristan visit. The trip came following an uptick in violence and deadly tribal feuds in the two tribal districts.

On February 22, four women aid workers were killed and two others injured in a drive-by shooting by militants riding on motorbikes in Mir Ali town. Separately, gunmen killed one person and abducted at least eight others in the Shewa area of North Waziristan.

In neighbouring South Waziristan district, multiple casualties have been reported in a clash between the Zalikhel and Dotani tribes over a piece of land. Entrenched on mountaintops, tribesmen from the two sides used light weapons against each other.

The military spokesperson had sought to downplay the fresh violence saying every incident should not be taken as a terrorist attack. “There can be law and order problems. We should not be incident specific in terms of discussing these challenges,” he stressed. “These incidents would not come down to zero,” he explained, insisting it would take time to bring complete normalcy in the erstwhile tribal areas.