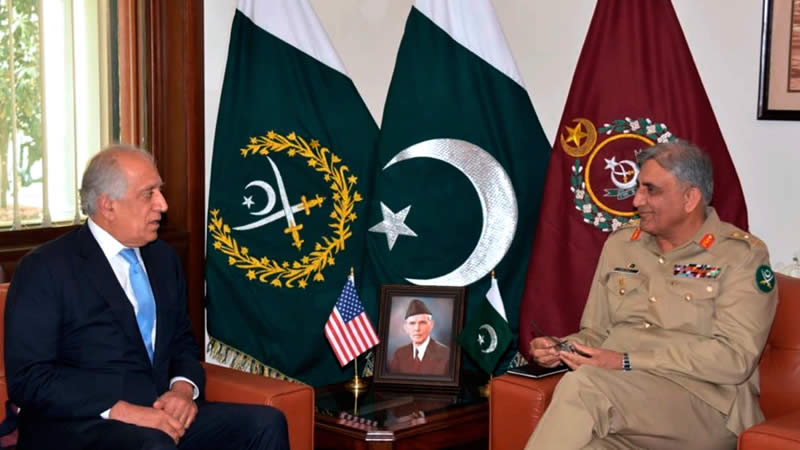 “Matters of mutual interest, regional security and ongoing Afghanistan Reconciliation Process were discussed during the meeting,” the ISPR said in a statement.

The US envoy’s latest visit to Islamabad comes after the Biden administration proposed a power-sharing arrangement with the Afghan government and the Taliban. Khalilzad delivered the new proposal to the two sides during his recent visits to Kabul and Doha.

The proposal shared by US with the Afghan government and Taliban pertain to future constitutional and governing arrangement, “a roadmap to a new, inclusive government”, and terms of “a permanent and comprehensive ceasefire”.

Taliban spokesman Mohammad Naeem has confirmed that the group has received the proposal and was internally deliberating on it for developing its response.

First Vice President Amrullah Saleh, meanwhile, at an event in Kabul on Monday, according to Afghan media, said “there will never be any compromise on Afghanistan’s Constitution and on the people’s right to vote”.

There was no word from the Pakistani side as to how it was seeing the new US proposal.

Secretary of State Antony Blinken, in a letter to President Ashraf Ghani, had underscored the urgency for a political settlement of the Afghan dispute, while warning that “Taliban could make rapid territorial gains” in the eventuality of a US withdrawal.

US, under the agreement signed with Taliban in Feb 2020, has to complete its withdrawal from Afghanistan by May 1. However, the new administration is currently undertaking a review of the peace deal signed with the Taliban. Blinken in his letter had emphasised that no option was for the moment being ruled out since the review process was in progress.

The secretary of state had in his letter urged President Ghani to work for developing consensus in Afghanistan on negotiation with Taliban on “governance, power sharing, and essential supporting principles”.

Washington has, moreover, initiated a “high-level diplomatic effort” with the regional countries for developing a unified approach for supporting the peace process. In this regard, US is requesting the United Nations to convene a meeting of the foreign ministers and envoys from Russia, China, Pakistan, Iran, India, and US.

The Biden administration is asking Turkey to host a meeting of senior representatives of the Afghan government and Taliban for finalising a peace agreement.

On the ceasefire issue, about which the Taliban have been reluctant to talk as long as a final settlement is not achieved, the US has proposed a 90-day reduction in violence so as to support the latest diplomatic effort and at the same time pre-empt the launch of Taliban’s annual spring offensive.

Ambassador Khalilzad had on Sunday called Indian External Affairs Minister S. Jaishankar to brief him on the latest developments in the Afghan peace process including the latest US proposal.