Fazl, Nawaz Agree to go ahead Even if PPP Leaves PDM 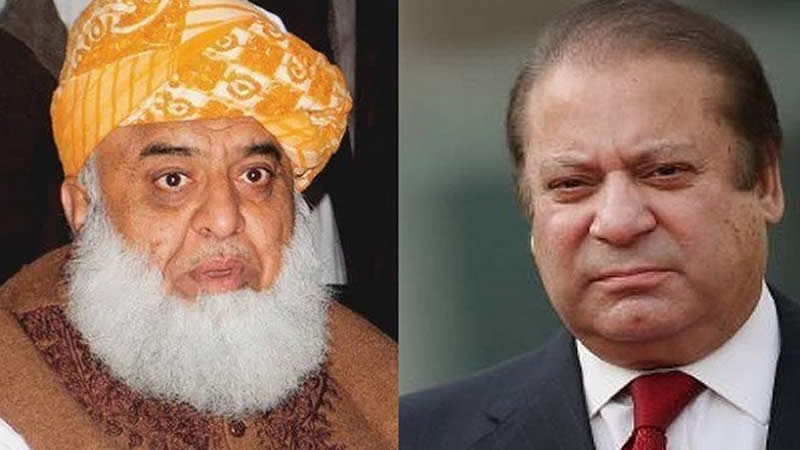 Two days after announcing postponement of the anti-government long march due to the Pakistan Peoples Party (PPP)’s rejection of the proposal of submitting en masse resignations from the assemblies and in an effort to keep the opposition’s alliance intact, Pakistan Democratic Movement (PDM) president Maulana Fazlur Rehman on Thursday separately talked to former president Asif Zardari and Pakistan Muslim League-N (PML-N) supremo Nawaz Sharif over telephone.

Sources in the three major opposition parties confirmed to Dawn that the Maulana, who is also head of the Jamiat Ulema-i-Islam (JUI-F), talked to the leaders of the two parties over the issue of the resignations and the proposed long march.

The sources said Mr Zardari, who had forcefully opposed the idea of quitting the assemblies during the meeting of the heads of the PDM parties in Islamabad on Tuesday, told the Maulana that the PPP had decided to convene a meeting of its Central Executive Committee (CEC) after its public meeting in Rawalpindi on the occasion of the death anniversary of the party’s founder Zulfikar Ali Bhutto on April 4 in which they would again review the proposal of submitting resignations from the assemblies.

According to sources in the PPP, both Mr Zardari and Maulana Fazl once again tried to convince each other on the issue of en masse resignations. However, Mr Zardari reiterated his stance that they should not come out of the assemblies as such a situation would only strengthen the hands of “the establishment” and Prime Minister Imran Khan.

Mr Zardari also expressed concern over the decision of the other PDM parties to link the resignations with the long march. The former president drew the attention of the Maulana to the agreed “plan of action” in the multi-party conference held in September last year, which clearly stated that the resignations would be the last option and for this purpose, a committee would be formed.

Mr Zardari, the PPP sources said, told the Maulana that the PML-N and other parties had suggested resigning from the assemblies believing that by doing so they might block the Senate elections and prevent the government from taking a majority in the upper house of the parliament. However, he opined, after contesting the Senate elections, the issue of the resignations had already become redundant.

The Maulana told Mr Zardari that the PDM component parties would wait for a final reply from the PPP after its CEC meeting before making any decision.

Later, the Maulana talked to Mr Sharif, who has been living in self-exile in London for more than a year, and apprised him about his conversation with Mr Zardari.

The sources said that the two leaders also discussed the probabilities in case the PPP decided to stick to its previous decision of not resigning from the assemblies. The two leaders, the sources said, were of the view that the PDM should continue its struggle against the government and should go ahead with its plan, even if the PPP decided to formally part ways with the alliance. They agreed to convene another meeting of the heads of the PDM soon after the PPP’s CEC meeting to discuss the future strategy.

The cracks within the ranks of the 10-party opposition alliance had become visible on Tuesday when its leadership announced postponement of their March 26 anti-government long march due to differences over the issue of the resignations.

An upset looking Maulana Fazl had suddenly left the press briefing without taking questions of the reporters after making a brief announcement that the PPP had sought more time to reconsider its position on the issue of en masse resignations and till the time the PPP would come back after an in-house discussion in its CEC, the long march stood “postponed”.

Before leaving the venue, the Maulana had disclosed that nine parties were in favour of resigning from the assemblies during the long march, but only the PPP had some “reservations over this thinking”. He said the PPP had sought time to discuss the matter again in its CEC which had been granted.

The sources said that in the PDM meeting, Mr Zardari had made submission of resignations conditional on the return of Mr Sharif to the country. The PPP leader in his speech launched political attacks on Mr Sharif and highlighted his own sacrifices, stating that he had spent 14 years in jail.

In the meeting, PML-N vice-president Maryam Nawaz had defended her father in a forceful manner and categorically declared that her father would not return to the country to put his life into danger.

The sources said that the Maulana was unhappy over the proceedings of the PDM meeting in which the PPP and the PML-N, the two arch rivals of the past, once again made some personal attacks against each other.

Speaking at a ceremony in Peshawar in Wednesday, the PDM president had expressed annoyance over the PPP’s attitude, saying it should have respected the opinion and viewpoint of the nine parties. He had also indirectly criticised the PPP for “leaking the proceedings of the meeting” to the media, saying that “discussions in such meetings are always kept secret as a trust and leaking the proceedings amounts to the breach of trust”.

Again speaking at a function in Islamabad on Thursday, without mentioning any name, the Maulana said that those who were afraid of going to jails should not have joined politics.

“It is a weakness to say that I can’t go to jail now. How will I fight? If you can’t fight then why you have joined politics?” the Maulana said without any reference, adding: “If you are in politics then you can find both power and jail.”

The Maulana once again asked the “establishment” not to support the government.

“Your job is to defend the country’s frontiers and not an illegitimate government,” he said.