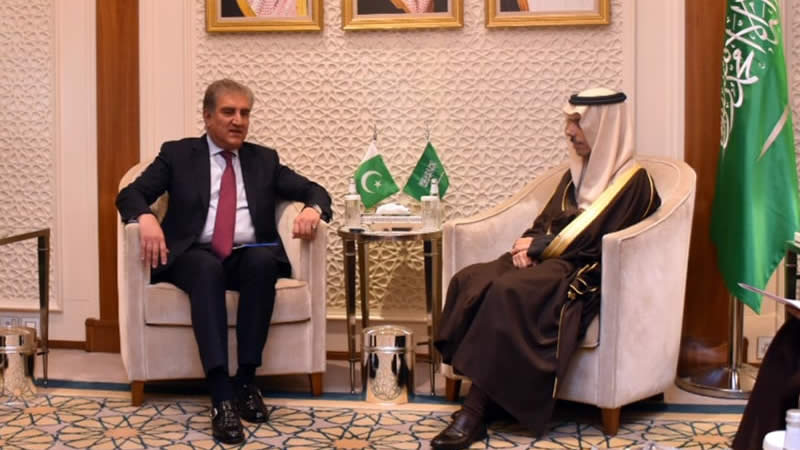 Foreign Minister Shah Mahmood Qureshi on Sunday held a telephonic conversation with his Saudi counterpart Prince Faisal bin Farhan Al-Saud in what appears to be part of a flurry of diplomatic efforts ahead of the gathering of regional countries on Afghan peace in Tajikistan where top Indian and Pakistani diplomats may meet.

Qureshi also spoke to the UAE Foreign Minister a day earlier, reinforcing the perception that both Saudi Arabia and the United Arab Emirates (UAE) might be playing a role in seeking a rapprochement between Pakistan and India.

The officials, however, are tight-lipped and would not say if Foreign Minister Qureshi and his Indian counterpart S Jaishankar would meet on the sidelines of the ministerial conference of Heart of Asia-Istanbul Process on Afghanistan taking place in Dushanbe on March 30.

The Foreign Office confirmed that the foreign minister would lead the Pakistani delegation while Indian External Affairs minister would represent his country.

This would be the first time Pakistan and Indian foreign Ministers would come face to face since the two sides recently agreed to restore 2003 ceasefire as well as decided to lower the rhetoric against each other.

“A possibility of a meeting at the sidelines cannot be ruled out,” said a diplomatic source.

Although, there is no official word from any side, certain countries seem to have been active from behind the scenes to ease tensions between the two nuclear-tipped neighbours.

Earlier, the deputy Saudi Foreign Minister in an interview had said Riyadh was promoting peace between Pakistan and India.

Qureshi’s telephonic conversation both with the Saudi and UAE foreign ministers suggested a coordinated move by the key Gulf countries. Pakistan is also trying to sort out other issues with Saudi Arabia and UAE, something that created a hiccup in bilateral ties.

Qureshi appreciated the steps taken by the Kingdom’s leadership in resolving differences among the countries of the Gulf Cooperation Council (GCC), as well as the recent initiative for promoting resolution of issues in Yemen through dialogue and diplomacy.

He also reiterated Pakistan’s support for the Kingdom’s territorial integrity and sovereignty. The Saudi Foreign Minister acknowledged Pakistan’s continued and steadfast support to the Kingdom of Saudi Arabia.

Qureshi expressed Pakistan’s commitment to augmenting cooperation with the Kingdom in all spheres. Appreciating the two countries’ collaboration in multilateral organizations, he hoped that this mutual support and partnership will further strengthen in future. Reciprocating positively, Prince Faisal expressed readiness to further fortify bilateral cooperation with Pakistan.

The two Foreign Ministers agreed to maintain steady momentum of high-level exchanges between the two countries.