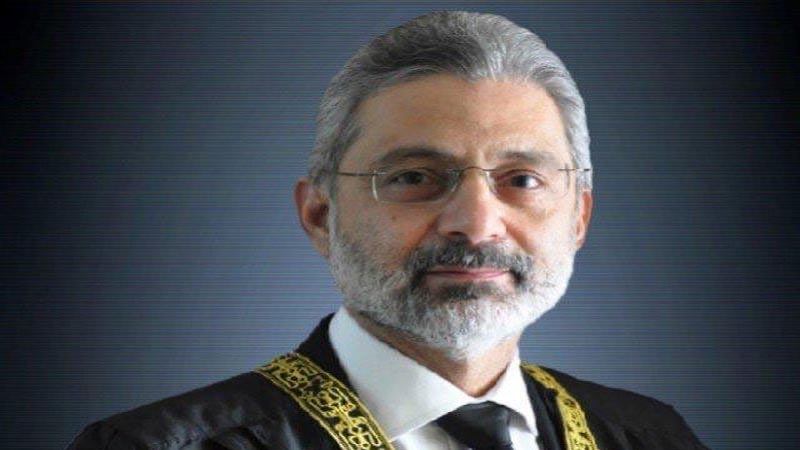 Supreme Court’s Justice Qazi Faez Isa on Wednesday expressed his surprise over Justice Umar Ata Bandial raising questions about his link with the assets owned by his family in the UK.

A day earlier, Justice Bandial posed three questions: he asked Justice Isa to explain if he had any link with his wife Sarina Isa’s accounts and transfer of money through them after his appointment as the Balochistan High Court chief justice.

In response to his queries, Justice Isa submitted a written statement to the court.

“It came as a complete surprise to the petitioner [Justice Isa] that the Hon’ble Justice Umar Ata Bandial, just before rising on Tuesday, 20 April 2021, asked a number of questions of fact which apparently emanated from [FBR official] Zulfiqar Ahmad’s order and/or from the FBR chairman’s report,” he observed in his statement.

“The petitioner was ready to respond but his lordship told him to do so on the next date of hearing which will be tomorrow at 9.30. However, late in the afternoon the petitioner learnt that the time had been advanced to 11 pm”, it added.

Justice Isa said since Sarina and he had given no credence to FBR official Zulfiqar Ahmad’s order and the report of the FBR chairman, Justice Bandial should not have raised these questions.

“If the petitioner [Justice Isa] submits to them and answers them he will effectively be endorsing a patent illegality and undermine his own case that nothing can be added to the reference,” he added.

“It is further submitted that it is not appropriate to introduce the report at the stage of hearing of the said review applications.”

The SC judge said he also wanted to correct a misconception that might have been created by Justice Bandial claiming that he had met with him.

“The petitioner states on oath that he has never once discussed his case with his lordship. The petitioner does not even go to the tearoom because [he] considers that it will be inappropriate to sit with his colleagues who are hearing his case,” he added.

“The petitioner has also requested in writing that the Hon’ble Chief Justice should not make him sit in any bench with any of the lordships hearing his case.”

The SC judge added that Justice Bandial “was ever so kind to send a bottle of honey from his farm which was returned with thanks as it may create misgivings”.

“The petitioner and his wife have also politely declined all private invitations extended by any Hon’ble Judge because it will bring them in private contact with those hearing their cases.”

On the retirement of Justice Faisal Arab, the petitioner attended his reference and the official dinners held in the premises of the Supreme Court, but for the stated reasons declined all private invitations held in his honour.

“However, the petitioner has interacted with the Hon’ble Justice Umar Ata Bandial when performing his duties and to maintain a healthy and happy working relationship,” the statement read.

On his refusal for not receiving a copy of FBR report, Justice Isa said he could not fathom why assigned a role to a person who had no concern with the tax filings of his wife or him.

“Nonetheless, the ‘selected chairman’ managed to come up with a report. The size of the report was unbelievable, it contained a number of files and looked as if it comprised thousands of pages.”

The order under challenge also did not state that a copy of the report be submitted to this court or be made a part of the record.

The petitioner and his wife refused to receive it if it was to be made a part of the record and thus public record as this would be a grave violation of the law and the Constitution.

“Neither the petitioner, nor Mrs Sarina Isa know what the report contains,” the judge maintained.

Earlier during the hearing, Justice Isa asked Justice Bandial to balance the scales of justice.

In another development, Justice Bandial said he had recused to be part of the Supreme Judicial Council (SJC) hearing Justice Isa’s case.

He said that someone else would be the council member in his place. However, Justice Isa requested him not to give such a statement which might prejudice his case.

Hamid Khan, the counsel representing different superior bars, contended that June 19, 2020 order had brought the reference against Justice Isa back to life.

He added that the apex court could not pass directions to the FBR probing into the matter.

“Judges’ children and spouses are not subject to the code of conduct.”

Upon this, Justice Bandial referred to the SC 2012 judgment wherein certain observations were passed regarding judges’ family members.

He noted that the SJC had yet to initiate proceedings regarding material related to Justice Isa.

Justice Bandial asked whether or not facts would be distorted after the quashing of the reference on legal defects. He, however, noted that there was no case of corruption against Justice Isa. The hearing of the case was adjourned till Thursday (today).