Kabah’s doors opened for PM Khan as he performs Umrah 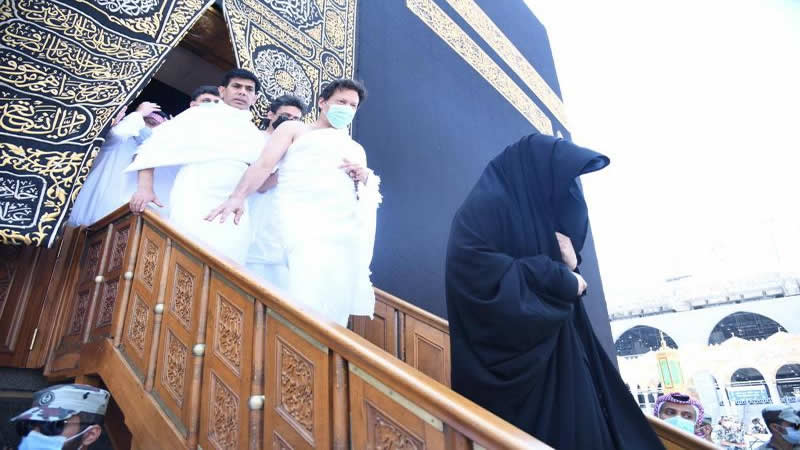 Prime Minister Imran Khan performed Umrah along with the first lady in Makkah on Sunday during his three-day trip to Saudi Arabia, his office said.

The doors of holy Kabah were opened for the premier and his delegation.

He also held a meeting with secretary general of the Organization of the Islamic Cooperation in Jeddah.

On Saturday, PM Khan paid his respects at the Roza-e-Rasool (Peace be Upon Him), hours after he landed in Saudi Arabia’s Madinah city.

The premier had arrived in Saudi Arabia on a three-day visit on the invitation of Crown Prince Mohammed bin Salman.

Saudi Arabia was the first foreign country Khan visited after his election in 2018 and he has visited the kingdom five times since.

“The Prime Minister paid rich tributes to the custodian of the Two Holy Mosques His Majest King Salman bin Abdul Aziz Al Saud for providing excellent and state-of-the-art facilities to the pilgrims,” read a statement issued by the PM Khan’s office.

According to the statement, PM Khan requested the Iman for special prayers for Pakistan’s progress and well-being of the Pakistanis.

“The Imam of Kaaba praised the PM’s initiatives on combating Islamophobia and promoting interfaith harmony,” said the statement. The premier invited the Imam to visit Pakistan and his invitation was accepted.

Meeting with OIC secretary general
The premier met OIC (Organization of Islamic Cooperation) Secretary General Dr Yousef A. Al-Othaimeen in Makkah and “highlighted the rise of Islamophobic incidents and different parts of the world”.

“The Prime Minister emphasised that it had to be a collective endeavour of the Muslim leadership to make sure that the world recognised the special love and reverence that Muslims had for the Holy Prophet (PBUH),” PM Khan’s office said in a statement.

PM Khan, according to the statement, told the OIC secretary general that it was necessary not to allow anyone to link Islam to terrorism.

“The Prime Minister strongly condemned the Israeli attack against Palestinians in Qibla-e- Awaal, the Al-Aqsa Mosque, and reiterated his call on the international community to take steps to protect the Palestinians and their legitimate rights,” read the statement.

US expresses ‘serious concerns’ about violent clashes in Jerusalem

US expresses ‘serious concerns’ about violent clashes in Jerusalem