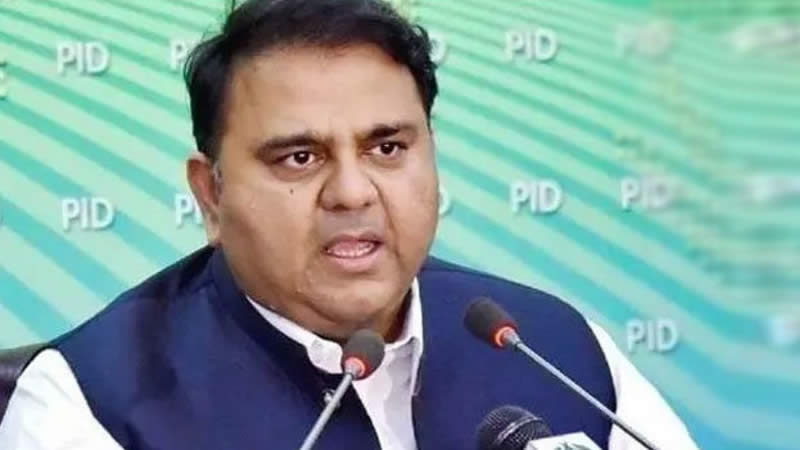 Federal Minister for Information and Broadcasting Fawad Chaudhry has asserted that Prime Minister Imran Khan referring to slain Al Qaeda leader Osama bin Laden as ‘martyred’ last year was a ‘slip of the tongue’ while Foreign Minister Shah Mahmood Qureshi refrained from calling him terrorist in an attempt to ‘move forward instead of looking at the past’.

However, the information minister said, Pakistan’s position regarding the terrorist outfit was clear from day one as the country as a member of the United Nations had voted for the UN resolution declaring Al Qaeda and its leadership (Osama bin Laden) terrorist.

“Our position is very clear. We as member of the UN had voted for the resolution declaring Al Qaeda a terrorist organisation,” he said in an interview with Geo News programme Jirga with Saleem Safi, which was aired late Sunday evening.

About the prime minister’s calling bin Laden a ‘martyr’, the federal minister said: “It was a slip of the tongue. He [the PM] had clarified it.” A clarification had been issued by PM Khan’s spokesperson after his remarks last year, he said before emphasising that Pakistan had rendered the most sacrifices in the war against terrorism. “Our position is entirely clear,” he reiterated, adding that when local media exaggerated things then of course the foreign media, too, would pick them up from local sources.

The prime minister in his last year address to the parliament had said that despite supporting the US in the ‘war on terror’, Pakistan had to face a lot of ‘humiliation’ as it had been blamed for US failures in Afghanistan. While citing an example, Mr Khan had recalled: “The Americans came to Abbottabad and killed, martyred Osama bin Laden. What happened after that? The entire world cursed at us and spoke ill of us.”

At the time, the opposition had lambasted Mr Khan for his remarks, with Pakistan Peoples Party chairman Bilawal Bhutto-Zardari saying that the prime minister’s choice of words was consistent with “his history of appeasement to violent extremism”.

The controversy resurfaced last week when Foreign Minister Qureshi in response to a question during an interview with Afghanistan’s Tolo News refrained from calling bin Laden martyr or terrorist.

When the interviewer quoted PM Khan’s speech as calling bin Laden a “martyr”, Mr Qureshi said: “Well, again. Out of context. He (the PM) was quoted out of context. And, a particular section of the media pair it up.”

Asked if he would disagree, the foreign minister paused for a while and then said: “I will let it pass.” About the foreign minister’s response, Mr Chaudhry said his refusal to call bin Laden a terrorist might have had to do with his desire to “move forward, instead of looking at the past”.

The minister recalled that before coming to power, he had detailed discussions with Mr Khan on different issues including Afghanistan. He said Mr Khan was a leader who had always advocated for political solution to the Afghan issue. Mr Khan believed becoming involved in the Afghan war compromised Pakistan’s position, he said.

He said Mr Khan during his discussions had never gone into details whether Afghan Taliban or anyone else should rule the neighbouring country. It should be their [Afghans] decision. He said rest of political leadership in Pakistan might be confused, but Mr Khan had been very clear.

The minister said Prime Minister Imran Khan went to Kabul to facilitate peace process. Similarly, the military leadership and DG ISI went to Afghanistan for the purpose. “We tried our best to assure Ashraf Ghani about our support for peace in Afghanistan. Like some of those in Pakistan who don’t understand that we can’t control Taliban, Mr Ghani, too, think we control Taliban,” he said reiterating that Pakistan didn’t control but had some influence on Afghan Taliban.

He said the three countries that had recognized Afghan Taliban in the past were Saudi Arabia, the UAE and Pakistan. “It is not the same position now. We doubt even the UAE or Saudi Arabia would be able to support the Taliban in the same way. That’s why we want inclusive government.”

Mr Chaudhry said in Pakistan, we fought a long fight against terrorism. “We remained clear and supported the entire world on Afghanistan issue.” But then there were mistakes on part of the US too, he said, adding that they even mishandled Afghan peace talks. If the US went for troop pullout without having a proper inclusive political settlement, it would be a blunder. The US and Taliban both had committed mistakes. Taliban didn’t keep themselves as a separate entity from Al Qaeda in the past. It seemed President Bush’s and Trump’s decisions were based on anger and haste, he said.

The minister said the border security situation had changed as Pakistan had completed 90 per cent fencing of border with Afghanistan. “Also, there are customs terminal and other arrangements as we are heading towards improved border security,” he explained.

About the exit plan, the minister said airspace corridor was available to the US. “It will be available for exit plan but not for military purpose.”

Asked if the US was unhappy with Pakistan government, he said it was not true. US special envoy on Afghanistan “Zalmay Khalilzad had praised Pakistan. Secretary of State is also in contact with Pakistan. Only PM Khan and President Biden are not in contact.” However, he said, Mr Khan in an interview with NYT explained that in global politics, neither the US nor India could afford to lose their relations with China. Such move would only hit global economy. “We can’t annoy China that helped us in thick and thin to make the US happy. Instead the world would benefit if China and the US got along and traded with each other,” he said, adding that Pakistan wanted to bridge the gap between the two giants.

“We had historical relations with the US since Liaquat Ali Khan’s era. If the US considers Pakistan a friend instead of enemy, it would prove fruitful for the US, India and China and all other countries,” he explained.

The minister said the PM was also optimistic about improvement in relations with India, for which he had set three conditions including restoration of pre-Aug 5 status of India-held Kashmir.

Responding to questions reports about the establishment’s deal with former president Asif Ali Zardari and Shehbaz Sharif, the federal minister said it was nothing but ‘misunderstanding’ on part of the masses. He said the two opposition parties would have to get rid of the Sharifs and Zardari for their survival. Afghanistan too faced same political crisis as in Pakistan because of dynastic politics, he said. The PPP had no say in Punjab, as their leadership blamed the Punjab for water theft in an attempt to woo voters of Sindh, he said. The PPP and PML-N had turned themselves into local or regional parties, he said, while suggesting the second tier of their leadership to review what went wrong and try to regain their national party status.

Asked about recent meeting of leader of PTI’s coalition partner PML-Q Chaudhry Pervaiz Ilahi with Mr Zardari, the minister said he would not take the names of Mr Zardari’s friends but everyone in Punjab knew that whosoever would contest elections on PPP ticket would lose at least 10,000 votes.

About the ruling Pakistan Tehreek-i-Insaf’s repeated defeats in by-elections in recent months, the minister said the seats in Punjab were of PML-N. Winning elections were like cooking a meal for which all types of spices were required, he said. It would be a great combination if a party having a standing in the masses also had the support of establishment, but if someone’s standing was zero, the establishment could not do anything for it, the minister explained.

Later in a tweet, Mr Chaudhry criticised Pakistan Peoples Party (PPP) chairman Bilawal Bhutto-Zardari over his speech for the upcoming elections in Azad Jammu and Kashmir.

Mr Bhutto-Zardari and Pakistan Muslim League-Nawaz (PML-N) Vice President Maryam Nawaz had run their respective party’s election campaigns crazily in the last elections of Gilgit-Baltistan, too, but they it dawned upon them later that not even one third of the total aspirants were contesting the elections on their party tickets, the minister said. In AJK, only eight candidates were contesting elections on PPP ticket, he said, adding that Bilawal’s speech clearly revealed the reality that he did not know about his party’s position in AJK.

This article appeared originally on Dawn.