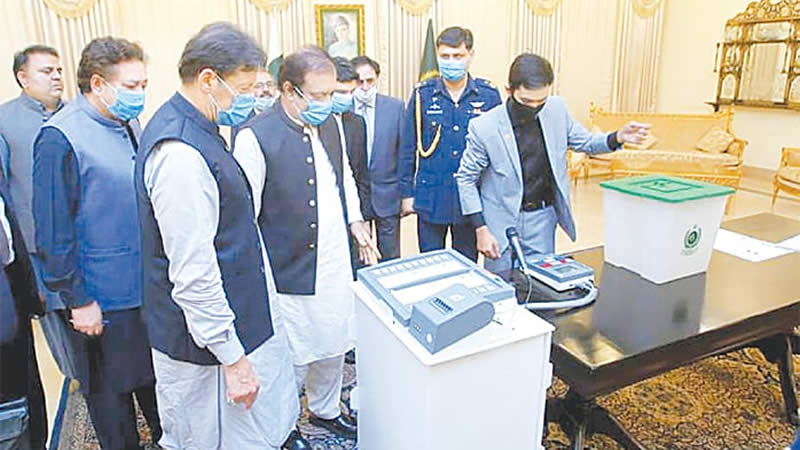 Talking to Dawn after the briefing held at the Prime Minister House, federal Minister for Science and Technology Shibli Faraz said the new machine had been manufactured using indigenous resources and according to the specifications of the Election Commission of Pakistan (ECP).

Mr. Faraz said that the machine had been developed keeping in mind the ground realities and in accordance with the specifications of the ECP, which had previously rejected the use of EVMs on technical grounds.

According to the minister, the new EVM was simple and user-friendly for voters as well as the polling staff and it would eliminate chances of rigging as it could not be bugged or hacked as it would have no operating system and would not be connected to the internet. Moreover, he said, the new EVM would also provide complete data of the polled votes for an audit in case of an election dispute.

The minister said that he would soon brief opposition parties and members of the parliament on the newly developed EVM and expressed the hope that after his briefing, most of the opposition’s concerns would be removed. He said the ministry would soon arrange a briefing for the media and the ECP officials where a practical demonstration of the machine would be given.

Mr Faraz praised the team of engineers and other experts and officials of his ministry for accomplishing the task within the stipulated time, saying that the prime minister had asked them to develop the machine in 12 weeks.

Giving a background, he said the ECP had rejected the idea of using EVMs after they were given a presentation on a machine that had been developed back in 2014. He said the previous machine was only fulfilling only 20 percent of the required specifications of the ECP whereas the new machine was 98 percent accurate in line with the ECP specifications.

The machines are being developed using indigenous technologies at half the cost of imported devices by National University for Science and Technology, Comsats and National Institute of Engineering (NIE) — the three establishments under the Ministry of Science and Technology. The three institutions have the capacity to manufacture 2,000 machines, costing an estimated Rs65,000 each, which was half the price of imported devices that offered no guarantees of working properly.

Mr. Faraz in a recent news conference had stated a special paper would be used on which the ink would not fade or dull for five years.

“Counting of votes would be a push of a button away and could be completed between 30 minutes to one hour,” he said.

In a related development, National Database and Registration Authority (Nadra) Chairman Tariq Malik gave a briefing to President Dr. Arif Alvi on the use of technology to allow overseas Pakistanis to cast their votes through i-voting while staying at the countries of their residence.

The meeting was also attended by Railways Minister Azam Swati and secretary of the Ministry of Information Technology Muhammad Sohail Rajput.

The Nadra chairman during a meeting of the sub-committee of the cabinet on EVMs chaired by Adviser to the Prime Minister on Parliamentary Affairs Babar Awan on Wednesday had proposed a significant change in the i-voting system to empower and enable voters to verify their votes included in the final count.

“Elections are not free and fair unless they are verifiable,” he had reportedly stated while briefing the subcommittee. The Nadra chief said he had also briefed the ECP on the new system, adding that the commission gave an indication that the job would be assigned to Nadra.

The ruling PTI had been pursuing the issue of the use of EVMs and enabling the overseas to cast their votes since the 2013 general elections. The PTI members in the parliamentary committee on electoral reforms, under then finance minister Ishaq Dar, had raised the issues on multiple occasions.