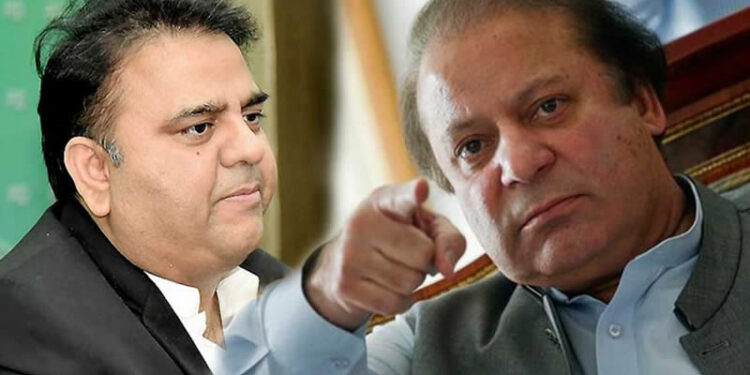 Information Minister Fawad Chaudhry on Tuesday said the government would bring back self-exiled former prime minister Nawaz Sharif to the country as he would never return himself, insisting that the opposition was incapable of toppling the present setup led by the Pakistan Tehreek-i-Insaf (PTI).

Speaking at a joint press conference with National Security Adviser Dr. Moeed Yusuf after a meeting of the federal cabinet, the minister said: “Nawaz Sharif will never return home voluntarily, rather the government will bring him back once the agreement with the UK government is finalized.”

The recent statement of former National Assembly speaker Ayaz Sadiq that he was going to London to bring Nawaz Sharif back had gotten the Sharif family in Jati Umra worried, Mr. Chaudhry said, adding that the government had finalized matters with the United Kingdom regarding the return of Nawaz Sharif.

“The opposition parties cannot overthrow the present democratically elected government with their so-called protest movement,” he said, claiming that only [Prime Minister] Imran Khan could act as the real opposition.

“Real leadership is required for agitation in politics, which the opposition lacks,” the minister said, adding that the opposition leaders were giving false hopes to their party workers.

When pointed out that Jamiat-i-Ulema-i-Islam-Fazl chief Maulana Fazlur Rehman had given a call for a long march which he claimed would lead to the fall of the government, the minister said the Maulana had been giving such calls for the last three years.

“Maulana Fazl reached Islamabad with his supporters in the very first year of the PTI’s tenure with the false hope that the government would be toppled; since then, he has been giving dates,” he said.

Commenting on the former chief judge of Gilgit-Baltistan Rana Shamim’s affidavit filed before the Islamabad High Court, Mr. Chaudhry said this showed how strong the Sicilian mafia — Nawaz Sharif and family — was as it had even hatched a conspiracy against the judiciary.

Responding to a question, the information minister said the government was forced to go to the International Monetary Fund due to the loot and plunder committed by Pakistan Peoples Party co-chairman Asif Ali Zardari and Pakistan Muslim League-Nawaz supremo Nawaz Sharif.

He said the opposition should come up with an alternative solution if they had any instead of merely resorting to point-scoring. Prime Minister Imran Khan, the minister said, had laid the foundation of a government based on transparency, and the assets of politicians and their families were in full public view.