Curfew Imposed in Rawalpindi as 10 Killed in Sectarian Clashes

by Top
in Featured, Punjab
0 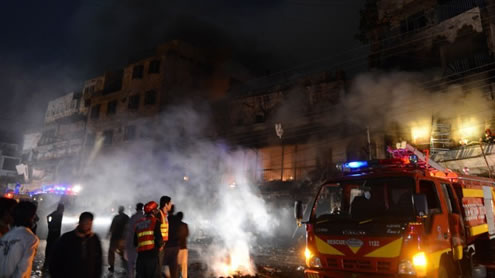 RAWALPINDI – The Punjab government has imposed a curfew in Rawalpindi after ten people were killed and 16 others sustained injuries when two groups clashed near Fawar Chowk in Raja Bazar during Ashura procession on Friday.

Some unidentified persons torched a cloth market and stopped fire brigade vehicles. Army took control of Raja Bazar and Madina Market after the situation got out of control. According to a spokesman of the Punjab government, curfew was imposed on the request of IG Punjab. The curfew, which was enforced at 12:00 AM, will remain imposed for 24 hours

The clashes between two rival groups started when aerial firing triggered a stampede when Ashura procession was passing through Fawara Chowk. Some unidentified persons pelted stones and also torched a cloth market nearby. The angry mob also stopped fire brigade vehicles to reach the spot. The fire engulfed more than 100 shops in cloth market while operation was underway to control it.

According to police sources, firing was also heard during the clashes. Angry mob also snatched 10 rifles from police officials and gunshots were also fired from these rifles. – Dunyanews