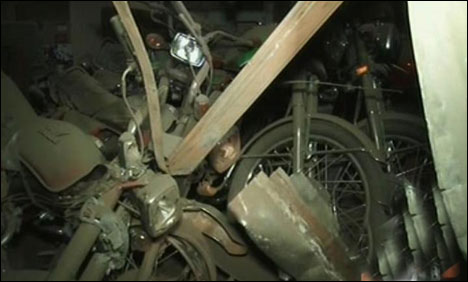 At least 16 people sustained injuries in a low-intensity explosion that blew up a shop located at Pakistan Chowk in the metropolis area of Ichhra in Friday’s small hours. The blast was so powerful that it devastated the entire shop that sells motorcycles using installment plan. The blast could have wrought havoc around, had the explosion taken place during daytime, as congested Ichhra market area usually bristles with the shoppers jostling around all day long on 15-foot wide road lined with vendors on both sides. Most of the shops were closed at the time of blast.

However, some restaurants were open in the area catering to the late night diners. Following the blast, a lot of local people swarmed the blast site.  The shop located at Pakistan Chowk, belongs to Momin Khan, who sells motorbikes on installment. He earlier received threats to wrap up his business as this involves markup banned in Islam. The same outfit demanded him to pay extortion money worth Rs.2 million. According to police sources, at least three miscreants overnight tossed a cracker outside the shop and fled the scene. The injured, all men, have been transported to Services Hospital and Ganga Ram Hospital, where medics said eight of the wounded, are in critical state. The blast partially damaged some nearby shops and vehicles. –SAMAA