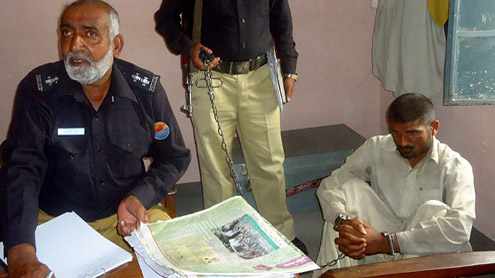 Police have also managed to arrest Mohammad Farman on suspicion of cannibalism after the heads of two babies were found at his house. Farman’s brother, Mohammad Arif, was arrested earlier yesterday on a similar suspicion. Farman had fled the police earlier on Monday and was to be produced today in an anti-terrorism court (ATC). Arif and Farman had been found guilty of the same crime in March 2011 and jailed. They were released in May last year after serving a two-year sentence. Arif’s arrest came yesterday when police raided their house in Kahawar Kalan village, near Darya Khan town in Bhakkar district, after neigh bours complained of an overpowering stench. A grisly scene awaited them – the heads of the two babies.

Arif admitted having eaten the child after his brother had stolen the body from a graveyard. Since there is no law against cannibalism in the penal code, Arif has been charged with dishonouring a body and public order offences. The same charges were made three years ago. On that occasion police had found the body of a 24-year-old woman who had died of cancer at the two men’s house. A leg was missing since they had eaten it, Najeebullah Khan, MPA of PML-N from Darya Khan, called upon the government to consider making a law to discourage cannibalism. The shocking discovery sent a wave of panic through the village, forcing many people to check the graves of their relatives. -Dawn

Once again Human head found from Cannibal Brothers by thetimesofpakistan