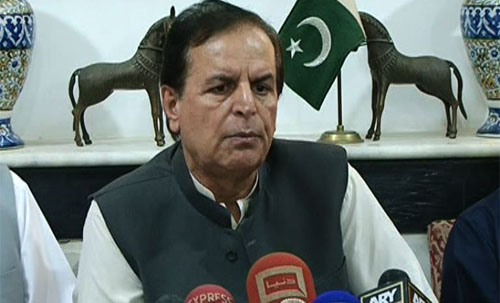 Suspended by his party following allegations against Imran Khan, the estranged elected president of Pakistan Tehreek-i-Insaf (PTI) Javed Hashmi announced on Wednesday his resignation from the party presidency and its membership.

Hashmi said that he could no longer continue his membership with a party ‘conspiring’ to dismantle democracy in Pakistan.

“There are a few hypocrites with Imran,” Hashmi said adding, “I have told him the bad times have begun for his party.” Earlier, PTI had suspended the membership of Hashmi and had summoned him to the party secretariat to explain his case on September 29.

PTI Information Secretary Shafqat Mehmood said he had failed to explain his position as asked by the PTI. “The party will take appropriate action in this case,” he said. PTI Chairman Imran Khan had earlier announced that he had parted ways with Hashmi for opposing the march on the Prime Minister`s House. During his speech on the floor of Parliament on September 2, Hashmi had clarified that despite his differences with the party’s high command, he was still PTI’s democratically elected president.

In the memorable speech to the joint session of Parliament, the seasoned politician had claimed that no PTI MNA had willingly tendered resignation to the party leadership and that a system existed in the country “to engineer making and breaking of governments.”

He made the claims shortly after disclosing “a scripted plan to overthrow the government, using violent protests as a pretext.” Hashmi had accused Imran Khan of bypassing a decision of the PTI’s core committee not to join Dr Tahirul Qadri’s march on Prime Minister’s House after receiving a message from ‘somewhere’. -dawn