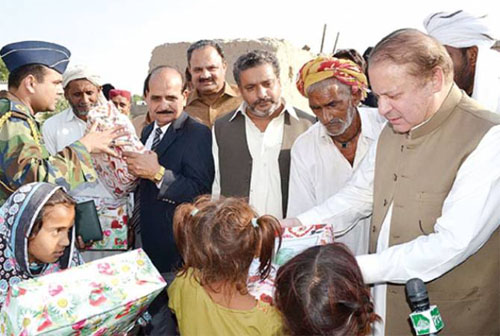 Prime Minister Nawaz Sharif has advised protesters in Islamabad to come forward to help flood victims if they have any compassion for the nation.

In a veiled reference to Pakistan Tehreek-e-Insaf, he said, “Go and make a Naya (new) Khyber Pakhtunkhwa if you want to create a Naya Pakistan.”

Addressing a public gathering at Uch Sharif on Wednesday, the PM said, “I have come here to share the pain of flood victims and to know about their situation.” He said he had come for helping the flood victims and to see for himself what difficulties they were facing. “I feel your pain, my heart beats with you and we will not rest until every flood victim is rehabilitated.” The PM said whatever help they were providing to the flood victims was their right. “We are not doing you any favour; we are fulfilling our responsibility and giving you your right!” He said that he wished he could sit there with those people and feel their pain and ask others to do the same.

“Come here and share the pain and sufferings of these people rather than sitting in the demonstrations in Islamabad,” he asked those participating in anti-government sit-ins in Islamabad. “Come here and help these poor souls and then you can come to me and tell me what I have done wrong and I will correct it,” he said to protesters. He said that people of this area have shown their trust in them during the last general elections but he cannot repay them in any way for the trust they reposed in the PML-N, though the government would keep working for their betterment. Nawaz said he was thankful to the parties who stood by him and showed their trust in the Parliament. [contentblock id=2 img=adsense.png]

He said that millions of people have cast their right of vote in favour of PML-N and now a handful of people are demanding his resignation. He challenged the protesting parties to gather as many people as had voted for his party and then demand his resignation. Nawaz invited the PTI and the PAT to work alongside him to strengthen Pakistan, he said that ‘this game’ could no longer be played in the country, “Come and help the people!” He said negative politics has caused too much damage to the country, as he urged the opposition to stop ‘negative’ politics and let the country prosper. Nawaz said PTI was able to make government in KP where the situation has worsened now. He said the people who claim to make “new Pakistan” should first work in Khyber Pakhtunkhwa, where they are in power, and make it a new KP before talking about creating a new Pakistan.

The PM said he believed that everyone in Uch Sharif has been provided the first instalment of Rs 25,000 in flood relief and whoever is left will be provided with the cheques soon. He said this task had been completed in record time and survey was also underway to determine the crops damages and compensation in that regard will also be made. He told that second instalment of 25 thousand rupees to the flood victim would start from October 20. Nawaz said that Ali Hassan Gillani has raised the issue of electricity and for this reason Quaid-e-Azam Solar Energy Park is being established in Bahawalpur which will produce as much electricity as would be more than enough for the southern Punjab. He said he wished that farmers of Pakistan be given relief in the prices of agri inputs as he wanted to see them lead happy lives— because if farmer is happy, the country will prosper. He said he wanted to see it happen within his ongoing tenure.

He said that soon a Lahore to Karachi motorway would be built which would pass from Bahawalpur area. In his address to flood victims in Ahmedpur East, Prime Minister Nawaz Sharif said that billions of rupees were required to overcome energy crisis and he vowed to end loadshedding during his government’s present tenure. He said that along with Bhasha Dam, Daso power plant will be constructed to add 9,000 megawatt electricity in the national grid.  The PM said that PML-N government was giving special attention to youth problems and “we are implementing plans and projects for the betterment of young generation”. Nawaz Sharif pledged to rehabilitate all flood victims as early as possible and assured that all out efforts will be made in this regard.

He stated that government would not leave the flood affectees alone in this hard time and added that it was not the time of doing politics of conflict and of personal gains. He said the government was standing with the flood affectees and every effort will be made for their rehabilitation. Prime Minister announced to construct a new embankment on river in Uch Sharif, dual carriage way from Ahmedpur East to Uch Sharif and new girls degree college at Chanigoth. He expressed his happiness at attendance in the public meeting by large number of people. He also distributed cheques among flood affectees. Federal ministers Mian Riaz Hussein Pirzada, Engineer Muhammad Balighur Rehman, MNA Ali Hassan Gillani, MPAs Qazi Adnan Farid, Malik Khalid Mehmood Warran, Mrs Fauzia Ayub Qureshi and Muhammad Afzal Gill and representatives of former local councils were also present on this occasion. -nation