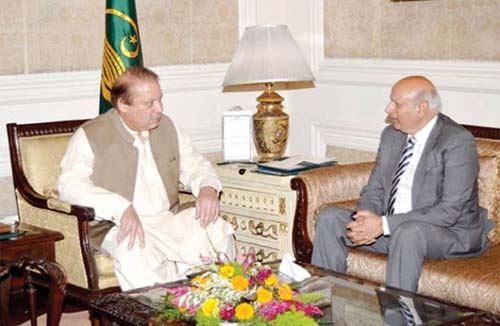 Prime Minister Nawaz Sharif on Monday visited Governor House Lahore to persuade Punjab Governor Ch Muhammad Sarwar to continue on his present assignment, but the latter remained noncommittal, according to the sources privy to the meeting.

This was his second meeting with the Prime Minister in less than a week.

Sarwar also had a meeting last week with Punjab Chief Minister Shahbaz Sharif to sort out the issues of his concern.  In the meeting, which lasted over an hour, Nawaz Sharif reportedly assured the Governor that all his genuine concerns regarding his powers as Chancellor of the public sector universities would be addressed.  The Prime Minister also pledged that he (Governor) would be given free hand to execute his initiative on safe drinking water and the one on education.   The option of his possible induction as Adviser to the Prime Minister was also discussed in the meeting, but the Prime Minister reportedly told him that it would be considered at some later stage.

Sources quoted the Governor as having told the Prime Minister that he could not sit idle in the Governor House any longer as he wanted to contribute in the national development utilising his hard earned experience spreading over 40 years.  Sarwar also complained about the cold response he was getting from the provincial bureaucracy in respect of his development initiatives.  Circles close to the Governor, however, believe that Ch Sarwar was still weighing his options and would make a decision about his future course of action in the near future. “One thing is clear that he would quit sooner or later if his concerns are not addressed by the PML-N leadership”, remarked one of his close aides privy to the ongoing cold war between him and the Sharifs.

In his earlier meeting with Prime Minister Nawaz Sharif at Islamabad last week, the Governor had desired that he be given some assignment in the Federal government with full powers to complete the assigned tasks. As per PML-N sources, Sarwar was interested in the Ministry of Overseas Pakistanis by his elevation as Adviser to the PM with the status of a Federal Minister.