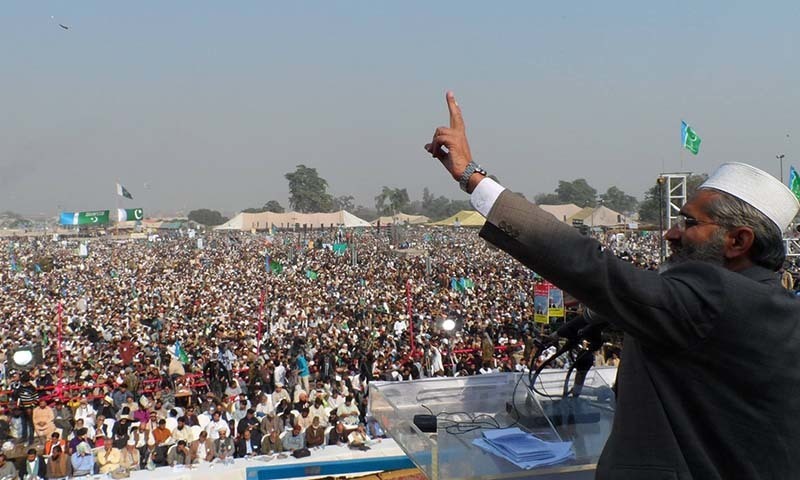 Jamaat-i-Islami chief Sirajul Haq has urged people to struggle for enforcement of an Islamic system and said he will come up with a line of action for achieving an ‘Islamic welfare state’ at a public meeting to be held at the mausoleum of the Quaid-i-Azam on Dec 25. Speaking on Sunday at the concluding session of his party’s three-day gathering here, Mr Haq said he would try to pacify the disgruntled Baloch people, by arguing that no one was against the country other than the elements robbing the people of their rights. He termed the ongoing military operations in tribal areas “a drama” and called for an immediate end to them so that the displaced people could be sent back to their homes soon. The JI emir asked the United States to stop interfering in Pakistan’s internal affairs and advised India to stop hurling threats at the country.

“If Indian leaders have any brains, they will use their national resources to wipe out poverty and hunger from their country instead of fighting against Pakistan.” He said the Indian government must understand that a big country could suffer a big loss. Mr Haq said the rulers would have to choose between Washing­ton and Madina. “The hypocrisy of the rulers cannot continue any longer. If they love American culture, they should leave this country and go to the US.”

He said it was due to the present system of tyranny, injustice and exploitation that the poor were committing suicides while the rulers were building palaces in the country and abroad with plundered national wealth. He lamented that hundreds of children died in Tharparkar because of hunger and poverty in a country where Rs1,500 billion was plundered by the ruling elite per annum.

Death toll Rises to 125 in Tharparkar

Death toll Rises to 125 in Tharparkar