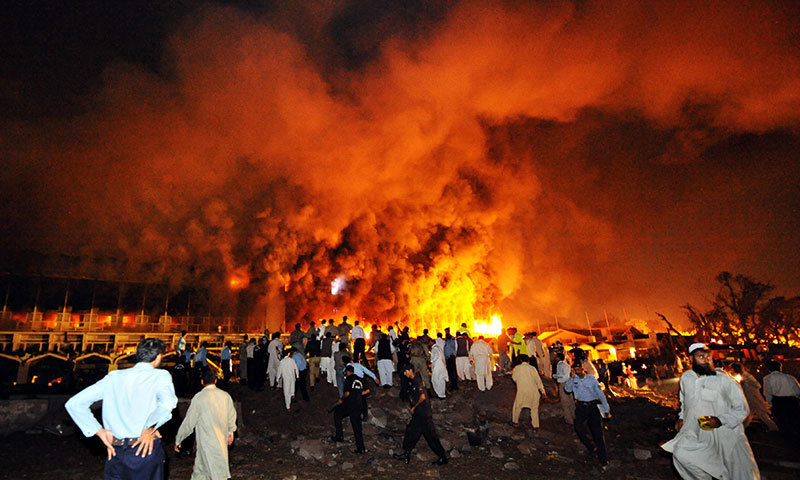 The two sons of the man accused of having carried out the Islamabad Marriott Hotel attack were expelled from a Kamalia town seminary on Monday. The sons of Mohammad Ashfaq – 17-year-old Suhaib and 10-year-old Suhail – were in the seminary to memorise the Holy Quran. Qari Ghulam Rasool of Madressah Abdullah Bin Abbas said he was not aware that they were sons of Ashfaq. “We came to know about their relations when their maternal uncle Arshad was arrested on Sunday,” he said.

Arshad, brother-in-law of Ashfaq, was picked up by intelligence personnel who had traced a suspicious call made to his mobile phone number. In 2008, he had been arrested by intelligence operatives seeking information about Ashfaq. Ashfaq had absconded to Afghanistan after the 2008 Marriott attack.

Two years ago his son Suhaib was arrested when he was going to Afghanistan to see him. He was released after six months of interrogation. Meanwhile, Arshad’s mother Sughra Bibi told reporters on Monday that she could not even think that her son could be involved in the Peshawar school attack.

She said Arshad looked after the house with the meagre income he earned through his donkey cart and they were living in a rented mud-house. “If it is proved that Arshad had any role in the school attack, I will never allow him to return to my house. I will hand over his son and daughter to people who have no children,” she said. -dawn