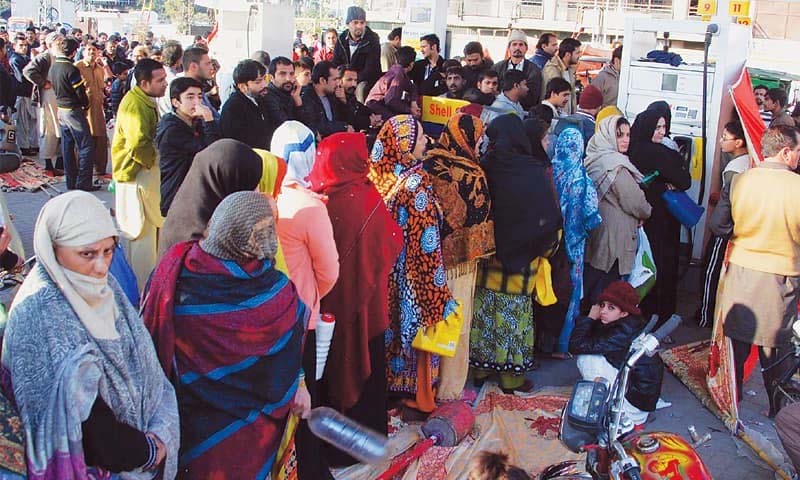 With no let-up in petrol and furnace oil shortage in sight, Prime Minister Nawaz Sharif has cancelled all his official engagements to focus on the fuel crisis and its management on Monday.

As the government notified stop-gap arrangements to look after responsibilities of the petroleum sector following suspension of key officials by the prime minister on Saturday. Petroleum Minister Shahid Khaqan Abbasi had a marathon session on Sunday with oil industry representatives to take stock of the situation. The meeting presided over by Mr Abbasi was attended by the heads of four major oil marketing companies – Shell, PSO, Hescol and Total-Parco – and the chairman of Oil and Gas Regulatory Authority (Ogra). Informed sources said the meeting had considered emergency measures which could be proposed to the prime minister provided the finance ministry made more funds available for importing petrol and furnace oil. They said the government was contacting some Dubai-based trading companies, some of them Chinese, for immediate purchases without bidding. The sources said the non-payment of funds by the finance ministry to pressurise the water and power ministry to improve recoveries now standing in excess of Rs580 billion and resultant delays by the Pakistan National Shipping Corporation (PNSC) had led to the shortages. On top of that, the enforcement division of Ogra could not timely follow the stock position with 26 oil marketing companies – some of whom did not have storage at all – as reserves depleted despite mandatory 21-day stocks at all times.

The acting charge of petroleum secretary was given to additional secretary Arshad Mirza. Shahid Islam, 67, currently a member of the PSO board of management and chief executive of Government Holdings Limited was appointed acting managing director of PSO. He is a friend of the petroleum minister. Abdul Jabbar Memon, a director at the petroleum ministry, was given the additional charge of director general oil. An official statement said the prime minister would spend the entire Monday on fuel management to provide immediate relief to people. He has taken serious notice of the fuel shortage and wanted to take important decisions so that those responsible for the crisis are taken to task and the gap between supply and demand is bridged. According to officials, total oil imports over the last three months of 2014 and the first 15 days of January stood at 797,200 tons, slightly higher than previous year’s 778,975 tons. The PSO imported slightly lower quantities of petrol this year than last year because of fiscal constraints as it defaulted 26 times in three months (Oct-Dec 2014). The PSO imported 101,000 tons of petrol in Oct 2014, compared to 164, 410 tons during the same month in 2013. Private oil marketing companies (OMCs) imported 38,000 tons in Oct last year. They did not import oil during the same month in 2013.

The prime minister will be informed that PSO’s imports were affected because of the PNSC. As part of a contract between the PSO and PNSC, rates of shipment revised every year in December are applied from January 1 of the following year. Due to various cases filed in the Sindh High Court by the Transparency International and other issues the rates could not be revised. The PNSC allegedly delayed the availability of vessels to the PSO. For January, the PSO awarded two vessels with the loading window of Jan 2-4 from the UAE and Jan 3-5 from Singapore. The PSO asked the PNSC for the vessels as per the contract, but the latter failed to do so and the vessel for UAE loading was provided on Jan 6. As per industry practice any vessel arriving late misses its right for berthing and has to wait. The vessel was berthed on Jan 10 and sailed on Jan 12. It arrived in Karachi on Jan 15, but because of high tide it was berthed on Jan 16. Dispatches to upcountry were started after that. Similarly, the vessel for Singapore loading was provided after a delay of 10 days. It reached the loading port on Jan 15, instead of Jan 5. The vessel completed loading on Sunday and will arrive on Jan 28-29 because the sailing time from Singapore to Karachi is 10-11 days depending on weather.

A petroleum ministry report said the PNSC had been informed time and again about the timely provision of vessels for petrol imports and its consequential effects on the country’s fragile supply chain. In the meanwhile, the PSO inducted another tanker which started loading on Sunday at the Oman port and is expected to arrive in Karachi on Jan 24. Besides depletion of stocks, Pak-Arab Refinery Company experienced an emergency shutdown on Jan 6 because of tripping in 11kV lines which halted the refinery’s operation for three to four days and reduced the availability of petrol. With its receivables exceeding Rs222 billion, PSO’s borrowing has gone beyond Rs284bn. Non-receipt of funds resulted in 26 defaults on local and international LC (letter of credit) payments. Despite repeated request since October last year, no effort was made to resolve the issue either by the Ministry of Finance or by the Ministry of Water and Power. PSO defaults on its LCs in October stood at Rs19.6bn, followed by Rs29.6bn in November and Rs46bn in December. PSO’s furnace stocks completely exhausted on Jan 13 and the next vessel is expected by the end of this month. The country will have to face prolonged loadshedding over the next week when the stocks at power plants get exhausted.