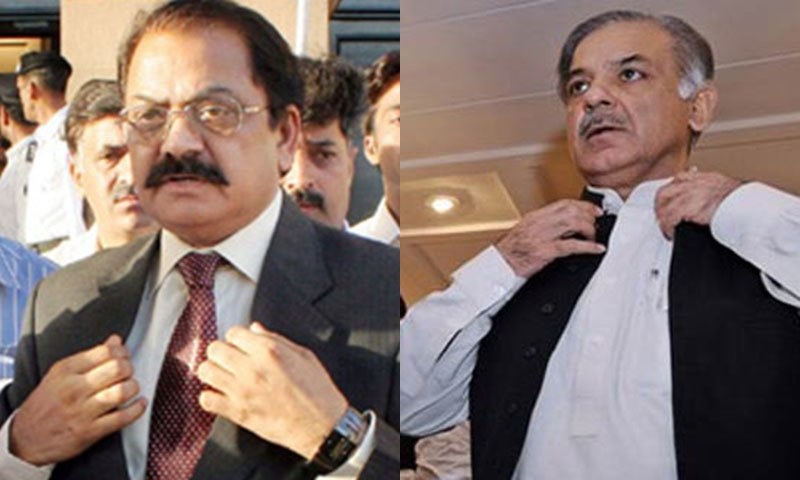 A joint investigation team (JIT) formed by the government of Punjab to investigate the Model Town incident of police firing on activists of Pakistan Awami Tehreek in June last year has exonerated Chief Minister Shahbaz Sharif and former provincial law minister Rana Sanaullah from charges of ordering or abetting the police action. “On rumours that PAT activists had abducted two policemen and that another policeman had been killed, some personnel of the force opened fire either on the orders of then superintendent of police (SP) security Salman Ali or at their own,” says the JIT report a copy of which is available with Dawn. According to the report, all JIT members unanimously declared Shahbaz Sharif and Rana Sanaullah ‘innocent’ and dismissed allegations levelled against them in the FIR lodged by Minhajul Quran’s director administration as ‘baseless and without any evidence’.

Neither the federal government had any role in law and order of the province nor was any evidence found to support the abetment charges. The five-member JIT headed by Quetta police chief Abdul Razzaq Cheema comprised ISI’s Col Ahmad Bilal, Intelligence Bureau’s Director Mohammad Ali, Senior Superintendent of Police Rana Shahzad Akbar and DSP Crime Investigation Agency Khalid Abubakar. According to the report, the presence of DIG (operations) Rana Abdul Jabbar at the time of the incident could not be established as the officer reached the site the following morning at 9.30am.

It said 42 PAT workers had been identified through footages telecast by private TV channels and later obtained by the JIT. The footages helped identify the PAT workers who ransacked an APC, attacked policemen by pelting them with stones and throwing petrol bombs. The workers involved in the attack will be presented before court after challans are completed. The report said the JIT recorded statements of the doctors who had treated the PAT workers and policemen injured in the clash and conducted post-mortem on the bodies. Rescue 1122 Director General Dr Rizwan Naseer was interrogated and information about those killed and injured in the incident was obtained. City district government and TMA officials were interrogated and their statements recorded. The JIT also collected information from people living in and around the PAT secretariat in Model Town.

The JIT also recorded statements of media personnel, including Umair Rana, Arif Malik, Ata Chuhan, Imdad Hussain (crime reporter daily Jang) and Asad Sahi (City42), and workers of different organisations who took part in rescue operation. Former assistant commissioner of Model Town Tariq Chandia was interrogated and anti-encroachment data and its scheduled operation was reviewed. The proceedings of a meeting held to take action against encroachments, a day before the Model Town operation, were thoroughly reviewed and statements of the officials who attended the meeting were recorded.