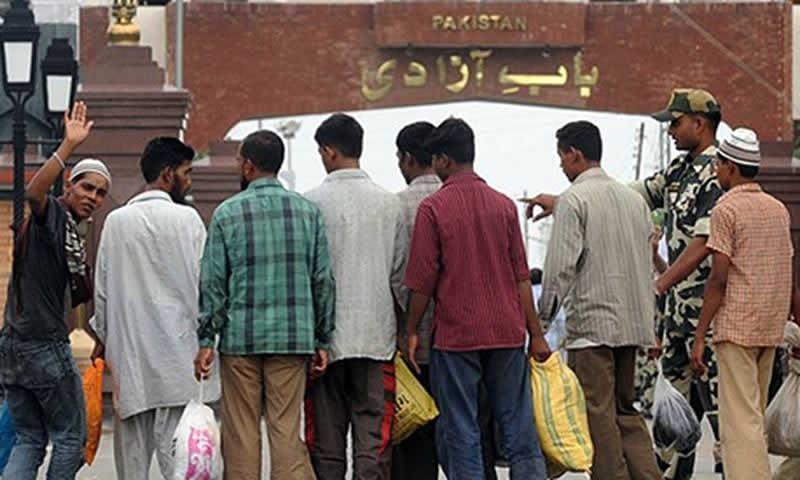 Eighty-six Indian passengers made their way home by crossing the Wagah border on foot on Monday.

According to Pakistan Railways, the Samjhota Express left the Lahore railway station as scheduled with 86 passengers, including 25 women and 10 children, but was refused entry by the Indian railway authorities.

“After the Indian authorities didn’t accept the train into their territory, it returned to Lahore on Thursday. And since then, these passengers have either stayed at the railway station or at nearby hotels,” Pakistan Railways’ Lahore Divisional Transportation Officer Shujat Hussain told Dawn.  He said since the train scheduled for departure to India from Lahore only left on Mondays and Thursdays at 10:30am, passengers started arriving at the station early on Monday morning. “But when we contacted the Indian authorities, they refused to accept the train due to the deteriorating law and order situation there,” he added. Mr Hussain said officials from the Indian High Commission in Islamabad had contacted Pakistan Railways through the Ministry of Foreign Affairs on Sunday morning about the status of their nationals.

He claimed that officials from the high commission, after reaching Lahore, informed the Railways that the train might not enter India on Monday due to the law and order situation in East Punjab. “In the meantime, we arranged transport to shift all passengers and their luggage to Wagah from where they entered their country by crossing the border on foot,” he explained. Asked about the future departures of the train, Mr Hussain said according to Indian High Commission officials, dialogue between protesters and officials of the Indian government was underway, adding that he hoped the issue would be resolved by Wednesday. “If it remains unresolved, the train won’t depart for India on Thursday as well,” said Mr Hussain, adding that Pakistan Railways took care of the passengers and they were happy with the hospitality they received in Pakistan.

US Airdrops Ammunition to Syria Rebels

US Airdrops Ammunition to Syria Rebels