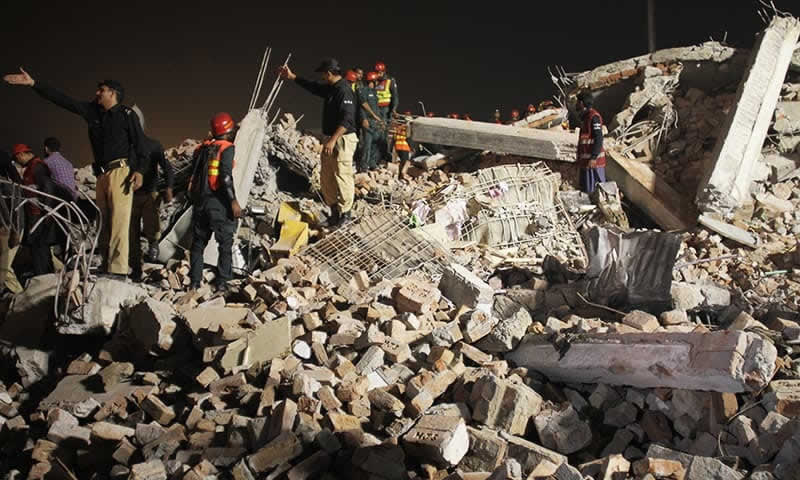 Rescuers searching for 100 people trapped in the rubble of a collapsed under construction factory here worked through the night into Thursday in a bid to find people trapped in a disaster that has already claimed 20 lives.

As the sun came up over Lahore, soldiers and police scrabbled through the debris of the building, which came crashing down less than two weeks after a 7.5 magnitude earthquake rocked the region.

The factory may have suffered structural damage in the October 26 quake, which killed almost 400 people across Pakistan and Afghanistan, Punjab Chief Minister Shahbaz Sharif said. “I have heard about the earthquake affecting the building, but according to labourers the owner continued to build an extension,” he told reporters. Abdul Razzaq, a rescue official at the scene, told AFP they were racing against time to get to people still believed alive.

“The operation will take time and our aim is to reach the areas of the rubble where we are still hearing voices of crying and help,” he said.  Mohammad Usman, the top administration official in Lahore, who was coordinating the response to the disaster, said Wednesday 70 people had been pulled out alive, including 51 taken to hospital.

The army said it was deploying specialist search teams and engineers to help the rescue effort. The collapse occurred at the four-storey Rajput Polyester polythene bag factory in the Sundar industrial estate, around 45 kilometres southwest of Lahore’s city centre.

Jam Sajjad Hussain, a spokesman for the rescue services, said 100 people were still trapped several hours after the roof collapsed, while ambulances were taking the injured to hospital. “All our rescue workers are on site but it is such a big incident that we have called rescue workers from other nearby districts,” he added.

US Congress approves $100m for Fata

US Congress approves $100m for Fata