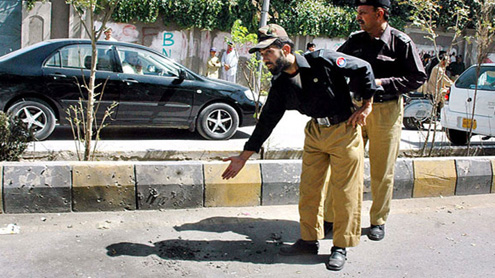 At least eight policemen were killed and 20 others, including civilians, were wounded Thursday morning in an explosion targeting a police bus near Razzaqabad police training college in Karachi’s Shah Latif Town, Dawn News reported. Rescue teams reached the site of attack whereas the victims were shifted to Jinnah Hospital.

The rear portion of the targeted bus was completely destroyed in the explosion and 50 persons were reportedly on board the vehicle. Moreover, additional contingents of police, Rangers and the Bomb Disposal Squad (BDS) reached the spot and cordoned off the area as a probe into the incident went underway. A BDS person told a television news channel that a suicide bomber apparently rammed an explosive-laden vehicle into the police bus adding that details would be confirmed after a thorough probe into the incident. The blast was heard in a radius of two kilometres.

US to End Boycott of India’s Modi Ahead of Election

US to End Boycott of India's Modi Ahead of Election