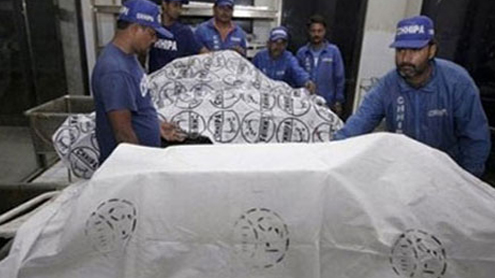 At least 11 people including religious scholar Allama Taqi Hadi Naqvi and teacher of a seminary Qari Ali Hasan were killed in different incidents of firing in Karachi on Thursday. Allama Taqi Hadi Naqvi was shot dead near board office located in North Nazimabad area in an apparent incident of target killing. According to police, the incident took place when four unidentified armed men riding motorbikes opened fire at the rickshaw Allama Naqvi was riding in, resultantly he lost his life on the spot. The body was taken to the hospital.

Police have launched an investigation into the murder. In another incident, unknown gunmen opened fire outside a seminary located at Abul Hassan Isphahani Road that killed two persons including the administrator of seminary Qari Ali Hassan and his son. Unknown assailants opened fire on a car in Hussainbad, injuring two people.

The injured were taken to a hospital where they succumbed to their injuries. A man was killed and another injured when gunmen opened fire on a vehicle near Gharibabad Underpass. Other incidents of firing took place in New Karachi and F.B Area.