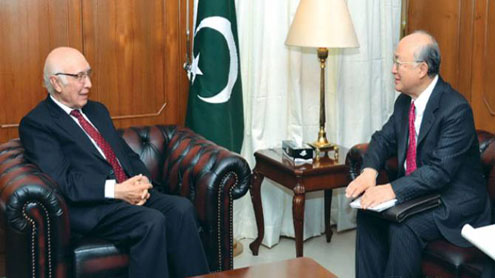 Pakistan has renewed its commitment to intensify collaboration with the International Atomic Energy Agency (IAEA) as it seeks to expand its reliance on nuclear energy for civilian purposes. It was decided to further strengthen efforts to increase technical cooperation, a Foreign Office statement said on a meeting held on Monday between visiting IAEA chief Yukiya Amano with Adviser on Foreign Affairs and National Security Sartaj Aziz. The meeting took place ahead of the Nuclear Security Summit to be held in the Hague later this month.

But officials said the meeting and the summit were not related to each other. Pakistan is working to increase the contribution of nuclear energy to the energy mix as part of its strategy to reduce the power deficit that has caused prolonged outages. The country expects to have seven functional 1,100MW nuclear plants by 2030, work on two of which has already begun. The plants will be in addition to four smaller 300MW capacity units. Besides, Pakistan is using nuclear technology in medicine, agriculture, food preservation, water management and industry.

All of the country’s nuclear power plants are under the IAEA’s safeguards and Pakistan has always advocated a central role for nuclear watchdog in global nuclear architecture. “Mr Amano appreciated Pakistan’s safe and secure operations of nuclear power plants in the country,” the FO statement said. Pakistan has a very productive and mutually beneficial relationship with the Agency, the FO noted. Dwan