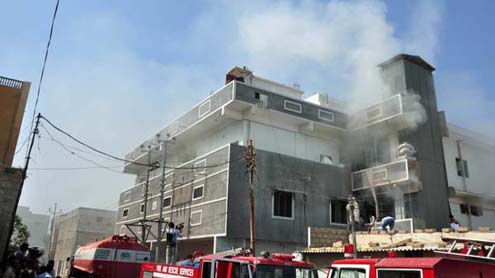 A man was killed while two more sustained serious burns in a towel factory blaze here on Thursday, Geo News reported. The fire broke out in the three-storey building that houses a small towel-making unit during the wee hours of Thursday. The unfortunate factory, which now stands almost gutted, is located in Gulshan-e-Maymar’s Ahsanabad town on the outskirts of metropolis.

Sources said that severe thermal injuries or smoke inhalation or both might have caused the death of the deceased. Firefighters are busy battling the blaze with the help of four fire tenders. -Thenews