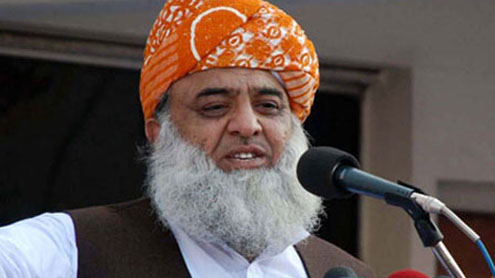 Jamiat Ulema-i-Islam-Fazl (JUI-F) chief Maulana Fazlur Rehman has claimed that the Sindh Assembly stands dissolved after it passed a resolution against the Council of Islamic Ideology (CII) and its recommendations. Talking to journalists at the press club here on Thursday, he said the Sindh Assembly through a resolution had demanded dissolution of the CII and abolishing its recommendation/resolutions which he said was negation of the ideology of Pakistan and a matter of concern.

The maulana said the Objectives Resolution had taken the final decision about the ideology of Pakistan. However, the Sindh Assembly had questioned its credibility by passing a resolution for abolishing the CII and scrapping the resolutions passed by the council, which was an unconstitutional step. “The Sindh Assembly is no more representative body of the people of Sindh and has lost its constitutional and legal status after passing such a controversial resolution,” the JUI-F leader said. He demanded fresh elections for the Sindh Assembly.

Maulana Fazl-ur-Rehman said he had directed his party leaders in Sindh to launch a mass contact campaign and devise their future strategy on the issue. He said the CII was working for the protection of Islamic ideology in the country and legal experts, scholars from all schools of thought and ulema were part of it. He said the CII was a constitutional body and nobody had the right to work against it. Maulana Fazl asked the PML-N to clarify its position as the party was also part of the resolution which had demanded abolishing the CII.  -Dawn