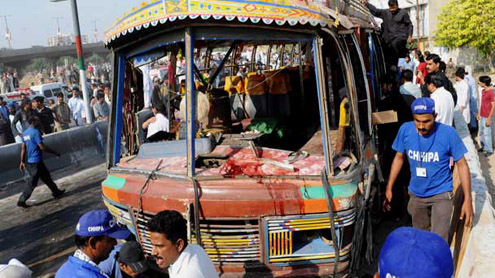 The accident took place near Pano Akil area in Sukkur when a bus traveling from Dera Ghazi Khan to Karachi entered into a head-on collision with a trailer, security personnel said. The bus was carrying over 50 passengers when the driver lost control of the vehicle and collided with the trailer coming from the opposite direction, rescue sources said.

Police personnel and rescue teams immediately reached the site of the incident and began cutting through the wreckage of the bus to rescue the victims. The deceased included women and children and also the driver of the bus, said rescue sources adding that the driver of the trailer had also sustained wounds in the mishap. Fatal traffic accidents are frequent in Pakistan and are often blamed on poor roads, badly maintained vehicles and reckless driving. -Dawn