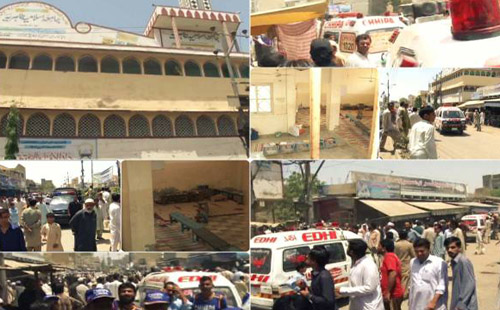 At least three seminary students were killed and nine others wounded in a grenade attack on a madrasah on the outskirts of Karachi.

According to initial reports, unknown miscreants on motorbike hurled multiple hand grenades on a mosque and adjacent madrasah located in Frontier Colony in Karachi’s SITE area. Police and rescue officials said 12 students were injured in the blast. They were rushed to civil hospital where three of the boys died during treatment. The students are aged between 8 and 12 years. Four of the injured are said to be in critical state.

Law-enforcing agencies cordoned off the area and the bomb disposal squad inspected the site. Nobody has so far claimed responsibility for the attack but Karachi, a city of 18 million people, has been plagued for years by sectarian, ethnic and political violence. The attack comes three days after a powerful roadside explosion left four people dead and at least 30 others injured in Karachi’s Delhi Colony. – SAMAA