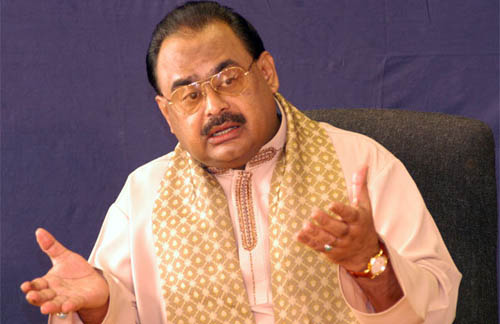 Muttahida Qaumi Movement chief Altaf Hussain was arrested in London on the charges of money laundering, sources in MQM said on Tuesday.  The London Police had been investigating Hussain in this case for over several months now.

In a TV interview, Altaf had revealed that all his bank accounts in Britain had been frozen by the authorities. The MQM chief had admitted that the British authorities had conducted raids at his house and at his office. MQM Rabita Committee member Aminul Haq says they will issue a statement regarding this and will inform everyone about the situation. Karachi Stock Exchange dropped by 780 points as soon as the news of Altaf Hussain arrest broke out.  The market is now recovering. Javed Chaudhry, while speaking to, said London Police were investigating Hussain for three cases of money laundering, hate speech and Imran Farooq murder.  In June last year, as part of their investigation into the Imran Farooq murder case, Scotland Yard had raided Altaf Hussain’s house in London. The search operation had continued for over 55 hours.

Later in July 2013, a spokesperson for the Metropolitan Police in London had told The Express Tribune that a significant amount of money was seized in the raid from the house of the MQM chief. However, the spokesperson did not disclose whether the politician is being questioned over it. Another spokesperson had said that if a money laundering case is established, then it would be treated as a financial case, separate from the murder case of Dr Imran Farooq. Farooq, 50, was a former leader of MQM and had lived in London in self-imposed exile from 1999. He was on his way back from work when he was attacked outside his home in Edgware, north London, in September 2010. A post-mortem gave the cause of death as multiple stab wounds and blunt trauma to the head. A kitchen knife and a house brick used in the attack were recovered at the scene. -tribune