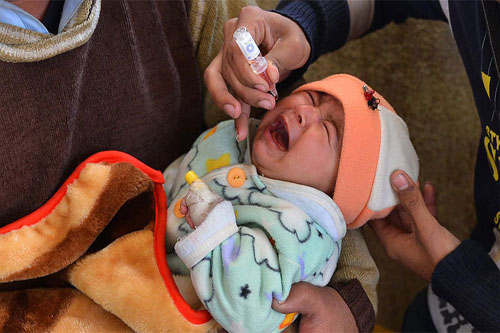 A family in Korangi was informed on Thursday that two minor siblings were suffering from polio, though the family had the brothers inoculated more than once during routine campaigns, officials said.

With two more polio cases in the city, the provincial government received confirmation of four polio cases within two days — three from Karachi and one from Dadu. The provincial tally has now reached 23.

The officials said Ajmal Khan, a labourer from the Pakhtun community, residing in Union Council 3 of Ittehad Town brought his three-year-old son Umair on Sept 27 to doctors with polio symptoms. On Oct 1, he reported to authorities with 12-month-old Kashif in the similar condition, officials added. “Their excreta samples were sent to the National Institute of Health in Islamabad and today we were informed that both siblings are afflicted with poliovirus,” said Dr Mazhar Khamisani, director of the expanded programme on immunisation of Sindh, while speaking to Media.[contentblock id=2 img=adsense.png]

In the confirmation report, both legs of the two siblings were stated to have been hit by polio. “It is the first time we have seen two children of a same family falling victim to polio.” Official records showed that Umair had been vaccinated thrice and young Kashif immunised twice in previous anti-polio campaigns. “One reason could be the lack of immunity in their bodies for any reason that did not support the vaccine’s efficacy,” said an expert. However, Dr Khamisani said the health authorities would investigate the matter. -dawn