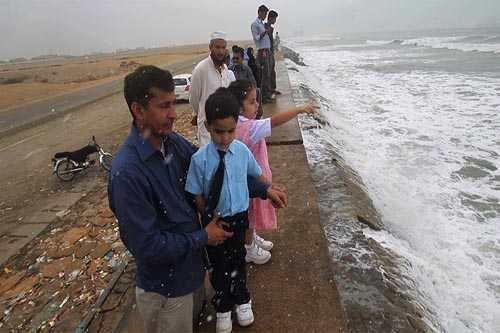 Eye of cyclone Nilofar will pass near Karachi coast

The eye of cyclone Nilofar, which has been classified by officials as a ‘very severe cyclonic storm’, will pass around 250 kilometres from Karachi, Pakistan’s chief meteorologist said Thursday.

Scientists say the pressure inside the eye of a cyclone is very deep and there are light winds, which can give a false sense of security. There is also an eerie sensation, as 200 kilometre per hour winds can suddenly go calm. The winds can return to being just as strong as the cyclone continues to move over. The National Disaster Management Authority (NDMA) has told district officials to prepare to evacuate villages along the coast and all beachside restaurants were closed. “We have estimated some 50,000 people might be evacuated if the need arises,” Ikhlaque Qureshi, a senior National Disaster Management Authority official, told AFP. The authorities claimed to have vacated government buildings and schools in several areas to house the affected people there.

All government offices and educational institutions in Karachi, Thatta, Badin, Sujawal and Tharparkar will remain closed on Friday where a cyclone emergency had been declared. Similarly Chief Minister Balochistan Dr Abdul Malik Baloch had announced the imposition of an emergency in coastal areas of the province.

According to the Met office, the cyclone re-curved north-eastward and located at latitude 19.5°N and longitude 62.3°E, about 800km southwest of Karachi and 680km south of Gwadar. The cyclone will continue to move towards coastal areas of lower Sindh and the Indian state of Gujarat at a speed of 14km per hour over the next 24 hours. At present the estimated central pressure of cyclone is 996hpa and the average sustained wind speed of around is 90-100 knots.

According to an advisory issued by the Met office, the cyclone will start weakening on Thursday afternoon and is likely to cross the coastal areas of lower Sindh and Indian Gujarat as a cyclonic storm or depression with a wind speed of 70-80km per hour gusting to 100km per hour on Friday night.  Under the influences of the cyclone, widespread rain/thundershowers with isolated heavy to very heavy falls accompanied by strong gusty winds are expected in lower Sindh, including Karachi, and coastal areas of Balochistan on Thursday and Friday. “The sea conditions along Pakistan coast are likely to remain rough to very rough on Thursday and Friday and fishermen of Sindh and Balochistan are advised not to venture in the sea,” it said.

Indian authorities said they were taking no chances with the storm, which is expected to make landfall in Gujarat’s Kutch district as the country began shifting thousands of people out of the way of Cyclone Nilofar due to hit the region this weekend.

Nilofar, listed as a “very severe cyclonic storm” by Indian weather officials, is barrelling across the Arabian Sea packing winds of up to 220 kilometres (132 miles) an hour. The cyclone will weaken substantially as it reaches the coast of the western Indian state of Gujarat on Saturday, according to the Indian Meteorological Department forecast. Nilofar will “cross the coast as a marginal cyclonic storm with a wind speed of 60-70 kilometers per hour, gusting to 80 kilometers per hour,” the department said on its website. -dawn