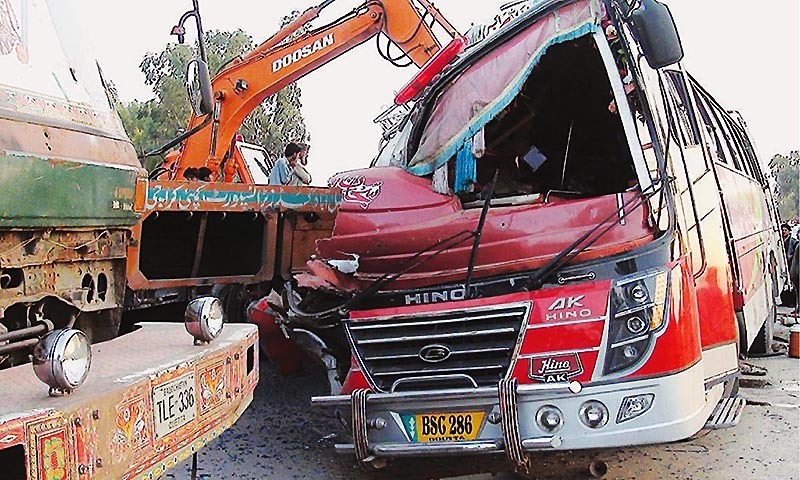 At least 50 people, including women and children, were killed and several others injured on Tuesday morning following a collision between a passenger coach and a trawler near Theri Bypass in Sindh’s Sukkur district.

Medical Superintendent of Khairpur Civil Hospital M Jaffar Soomro told Dawn that at least 50 people had died in the fatal mishap. He added that the condition of three wounded was critical and they had been shifted to the Intensive Care Unit (ICU) ward. The fatal accident occurred when the driver of the over-speeding coach, which was travelling from Khyber Pakhtunkhwa’s Swat district to Karachi, tried to overtake a vehicle resulting in a head-on collision with a truck coming from the opposite direction, according to motorway police sources.

The coach overturned after hitting the truck. Emergency and rescue teams reached the accident site and began shifting the victims to hospitals in Sukkur and Khairpur district. An emergency was imposed at the Civil Hospital Sukkur and other nearby hospitals whereas the condition of several wounded was reported as critical. Sindh Governor Dr Ishratul Ibad Khan expressed condolences over the fatal mishap and ordered for the provision of treatment to the victims. -dawn