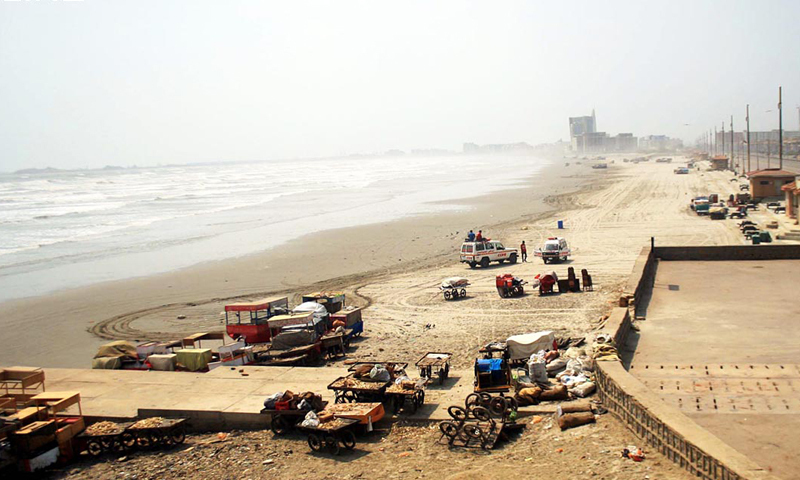 The Transparency International Pakistan (TI-Pak) drew on Wednesday the Supreme Court’s attention to what it claimed illegal sale of 350 acres of Clifton beach in Karachi by the Sindh government. An application moved by Advocate Hashmat Habib on behalf of TI-Pak’s adviser Syed Adil Gilani said the 350-acre sea beach (land to be reclaimed) worth Rs350 billion belonged to the federal government. But Chief Minister Qaim Ali Shah recently approved a proposal of the Sindh Board of Revenue for allotment of the land adjacent to the new breakwater in front of the Karachi Development Authority (KDA) Kehkeshan Scheme 5. The Karachi Municipal Corporation (KMC) administrator, the application alleged, had carved out plots in the area which had been allotted either as new allotments to SZABIST (Shaheed Zulfikar Ali Bhutto Institute of Science and Technology) or as plot adjustment to individuals or companies under the pretext of hardship cases. “The beach has been partially reclaimed by the Karachi Port Trust (KPT) and is a property of the federal government notified as KPT area,” the application said.

The TI-Pak requested the Supreme Court to take up the matter, along with the case relating to illegal sale of 600 acres of mangrove-covered area located between Zulfiqar Street No1 in DHA Creek Avenue and Korangi Road. It would be heard by the court on Dec 16. On Nov 26, a three-judge bench, headed by Chief Justice Nasirul Mulk, had stopped the Sindh government from selling the mangrove-covered land and ordered it to submit para-wise comments on an application also moved by the TI-Pak. The organisation had claimed that the land worth Rs400bn had been illegally allotted to a former secretary to the chief minister, who was trying to build a housing scheme and other commercial projects there. In its fresh application, the TI-Pak claimed that plans had been finalised to build a palatial 200,000 square feet house, in addition to a plot for the educational institution, for a political high-up on a 45-acre plot on the 350-acre KPT land allotted at a throwaway price.

Besides usurping the federal government land, the application said, the KMC had also committed contempt of court by violating the Supreme Court’s Nov 28, 2012, order which had restrained the Sindh revenue department from mutation, allotment, transfer and conversion of any state land and keeping any transaction or entry in the record of rights till the entire revenue record of the province was reconstructed.

The application argued that the approved master plan-2020 of Dec 2007 called for protection and conservation of Karachi’s coastal areas. Reclaiming any section of the sea front either on the landward side or the bordering sea would not be advisable because it would adversely affect the harbour, it added. The same restriction also applies to mud flats, marshes and backwater creeks which in no way be allowed to undergo artificial change detrimental to the existing hydrological environment, particularly around the Karachi Port. The application said that there were many other judgments banning the change of use of lands meant for public parks or recreation facilities for building houses and commercial buildings. -dawn