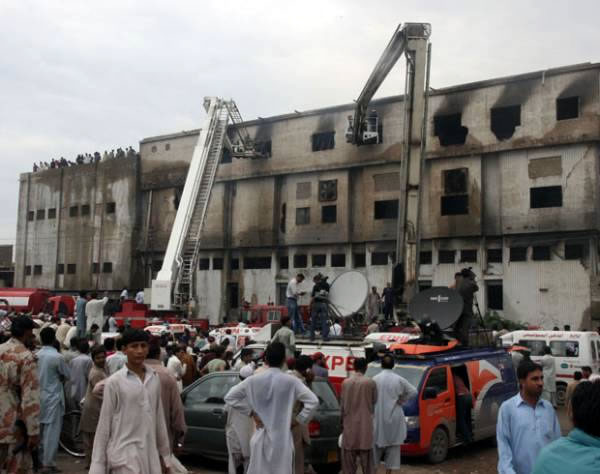 A travel ban has been slapped on six suspects of an alleged arson that killed more than 250 workers in a Karachi garments factory in 2012. “Rizwan Qureshi, Javed Shakeel, Hamad Siddiqui, Abdur Rehman alias Bhola, Asghar Baig, and Majid Baig have been put on the Exit Control List (ECL),” a notification issued by the government said Thursday. The ECL is a system of border control maintained by the Government of Pakistan under the Exit from Pakistan (Control) Ordinance. Those persons on the list are prohibited from leaving Pakistan. According to sources, Rizwan Qureshi’s shocking confession to an organized arson that gutted Ali Enterprises, a garments factory in Baldia Town Karachi forced the government to take a decision to this effect. Qureshi’s claims made headlines after a report by a Joint Investigation Team (JIT) was presented before the court last month. In its painstakingly prepared report, the JIT has clearly quoted Qureshi as claiming that he was not alone in his heinous crimes. Qureshi in his custodial statement had accused five others of being his accomplices.

According to the dossier, which was handed over to the court by the Rangers, Qureshi had set the factory on fire by using a highly inflammable chemical after the owners refused to submit to his extortive demands. Reportedly, Qureshi and his accomplices had demanded Rs200 million as extortion, which the proprietors of the unit that used to produce export quality apparel had categorically refused to cough up. There is more to it than what you have so far read between the lines. Surprisingly, the self-accused arsonist, allegedly an in-service government servant, has also claimed that a former minister had had the bail of the factory owners cancelled back in the day, while a high-ranking official had his palm greased with no less than Rs150 million to close the case.