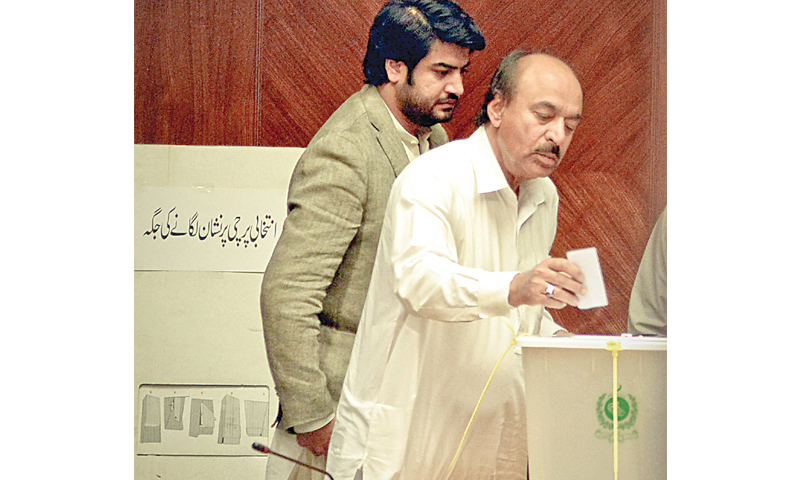 Despite claims by the provincial government that senate elections were held in a transparent manner on Thursday. In the 167-member house, the PPP has 92 MPAs, MQM 51, Pakistan Muslim League-Functional 10, PML-Nawaz eight, Pakistan Tehreek-i-Insaf four and National Peoples Party two. While four lawmakers belonging to the Pakistan Tehreek-i-Insaf stayed away from the polling process, total 163 lawmakers cast their ballots and of them seven candidates of the PPP and MQM collectively received 150 votes. The leader of the opposition in the Sindh Assembly conceded that at least five of their 18 MPAs cast their ballots against their conscience. Speaking to newsmen after the announcement of poll results by returning officer S.M. Tariq Quaderi, Sindh Chief Minister Syed Qaim Ali Shah said senate elections had been held in a free and peaceful manner which was proof that democratic culture was taking firm roots. The chief minister’s victory speech merely rubbed salt into the wounds of Leader of the Opposition in the Sindh Assembly Shaharyar Khan Mahar, who rejected the CM’s claims and said the level of “rigging and horse-trading” in senate elections had put the entire assembly to shame.

“Five of our members were made to change their loyalty through horse-trading. They will soon be exposed,” said Mr Mahar while addressing a press conference along with Nand Kumar, Imtiaz Shaikh and Nusrat Sehar Abbasi of Pakistan Muslim League-Functional. He was critical of the role of the election commission and said the ballot box was empty before the start of polling but afterwards there were two blank papers besides ballot papers when the box was opened. He asked how and who slipped in the two papers in the ballot box which had been placed before the returning officer and said it appeared the lawmaker whose vote had been bargained over was asked to drop the blank paper and bring the ballot paper which was later on dropped in the box after having been marked by the party MPA. The process was repeated twice, he said. In reply to a question, he said if any PML-F member was found guilty of horse-trading, action would be taken against him. The National Peoples Party had already indicated that it would not cast vote for the PML-F candidate.

“If we had wanted to indulge in horse-trading, we could have worked on PPP members who were suffering losses because of the government’s sugar cane policy but we did not like to set a bad example,” he said. MQM parliamentary party leader Syed Sardar Ahmad said that the MQM had an open alliance with the PPP and its members had cast their votes as per the decision of the party. MQM deputy parliamentary party leader Khwaja Izharul Hassan and Syed Faisal Sabzwari said that the MQM believed in clean politics and elections of the party candidates was manifestation of the philosophy of their leaders. According to results, the PPP’s Islamuddin Shaikh, Saleem Mandviwalla, Engineer Gyanchand Meghwar, Abdul Latif Ansari and Rehman Malik and the MQM’s Mian Muhammad Ateeq Shaikh and Khushbakht Shujaat won while Imamuddin Shauqeen of the PML-F lost as he could muster only 13 votes.