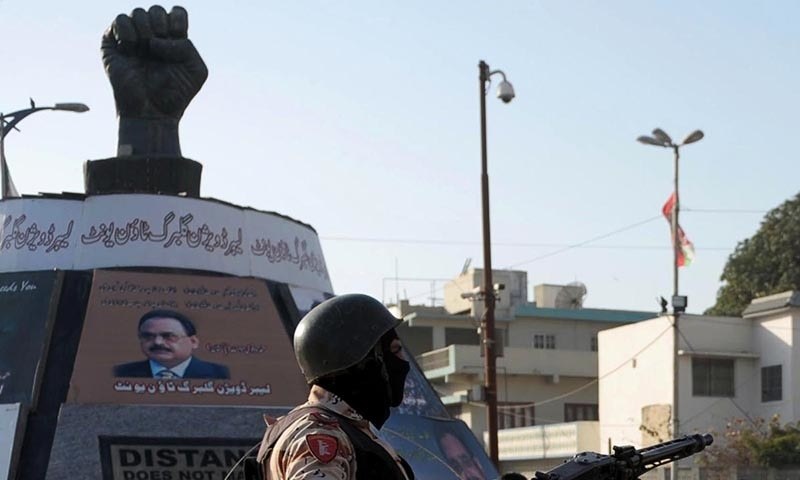 Opposition senators on Wednesday lashed out at Rangers officials for carrying out a raid on the MQM’s headquarters in Karachi and raised questions over the timing of the action. After delivering fiery speeches on the last day of the outgoing Senate,

MQM senators staged a walkout from the house, alleging that the raid might have been carried out to punish the party for not supporting the government’s candidate for the office of the Senate chairman. Members of the Pakistan Peoples’ Party (PPP) also condemned the Rangers’ action and joined the MQM senators in their walkout. However, Leader of the House Raja Zafarul Haq rejected the MQM’s allegations regarding the involvement of the ruling PML-N in the raid on the party’s headquarters. “I strongly reject the allegation. This is absolutely false,” Mr Haq said, wondering how this was possible when Prime Minister Nawaz Sharif had personally endorsed Mr Rabbani’s nomination as Senate chairman and even visited Zardari House. He said that under laid-down procedure, the chief ministers were acting as captains in the fight against terrorism in their provinces.


He assured that he would contact the Sindh chief minister and present the details of their consultation in the House.

The issue was raised by the MQM’s Tahir Hussain Mashhadi. Speaking on a point of order, the MQM senator alleged that the party was being victimised for its decision to support a good candidate for the office of the Senate chairman. Mr Mashhadi declared the Karachi operation a “complete failure” and demanded that the operation be “depoliticised”. MQM’s Babar Ghouri asked the PM to order a probe into the incident and book all those involved. He also sought Army Chief Gen Raheel Sharif’s intervention in the matter. “Was this action launched with the approval of Gen Raheel Sharif? If so, then we should be told whether political activities have ended in the country,” he said.